User review
The following review was submitted by DisturbedGuy, one of our regular contributors at HEXUS.gaming. The opinions expressed in this review are his own and not necessarily the views of the HEXUS.gaming team.

Note: Plain Sight is a multiplayer game only

Well, what can I say? When I saw the offer to review this game, I looked at the screenshots then instantly decided in my own mind that it wasn't worth reviewing as it wasn't my style of game and thought I would hate it. Oh how wrong was I! So, the first thing that caught my attention was the music, as soon as I started the game, the catchy little tune playing got me smiling and The basic idea of the game is, you are a robot; you smash other robots to bits and gain energy for doing so, while also gaining energy from collecting stars that appear around the map.

E - When you have some energy built up, press this and you self destruct, time it right and you can take out a fair few enemies.

Shift - Once you have jumped, if you want to return to the solid ground quickly, press this and you will hit solid ground in no time.

Left mouse button - Attack. Single click is a quick dash and attack towards an enemy you are locked onto, lock onto someone, click and hold and you charge up, once you are glowing white and within striking distance, release the left mouse button to attack your prey. This can also be used to move across the ground rapidly.

Mouse - To look around. 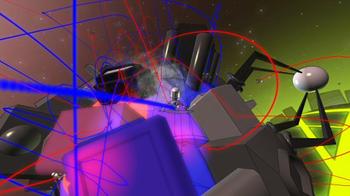 So feeling fully prepared off I went to find a server, was very pleased at how quick the servers appeared in the browser and just how many there were, picked a nice server with a few players in, joined and of I went on my adventures just me and my robot. After the first 30 seconds or so, I had died, twice which lead me to quickly realise that staying on the ground is definitely not the best option.

The key to survival on this game is jump, get in the air, and stay there as long as you can while trying to target enemies. As mentioned above, you gain energy by collecting stars and destroying other robots. Collecting the stars is the easiest way to gain energy as it means you don't have to come up against other robots that are bigger and badder than you, although this isn't to say that you can't beat them big bad suckers when you are nothing but a speck compared to them, show some metal (excuse the pun) and go for it, you can and will (eventually) win. If you manage to collect stars in a chain you get multipliers which and other goodies, so far I have got the following: -

Stealth - Does what it say, makes it so the enemy can't lock onto you or see you, which gives you the chance to sneak up behind your unsuspecting prey and offer a sharp sword to the back.

Shield - Protects you from enemy attacks, although you’re not entirely invincible with this one as the enemy can wear it down.

Flame Sword - FUN! Not only does it look cool but it offers a damage increase and slightly quicker movement.

This game is thoroughly enjoyable, I started the game at around 19:00, and after spending around 5 minutes registering and practicing, I was off into the game. The next thing I knew, it was approximately 20:15. As the old adage goes: time does fly when you are having fun. The game is very fast paced, and gets faster paced the more people that join the server, which also makes it that bit more hectic especially on the smaller maps, but it never stops being fun.

Cons:
* Trace lines left behind characters can get annoying on a 10 player server
* Very frustrating when you think you got the kill only to find yourself smash to bits
* Addictive.

Summary
The game on Steam is about £8 and I feel it's definitely worth it for the hours of enjoyment you will get out of the game. It's definitely one of those games you can just pick up and play when you feel the urge to chill out.

Posted by TooNice - Thu 15 Apr 2010 19:49
I guess this must be one of those games that look better in real life than on a screenshot. Because that sole screenshot doesn't not really spell ‘play me’. And I am not very demanding when it comes to graphics!