Free is the new expensive

One of the most revolutionary things about the Internet is the rise of the ‘freemium' business model, in which stuff is given away for free and then companies try to find a way to monetize the resulting audience.

Google is the king of this strategy, having built a multi-billion dollar company on the back of giving away a search engine for free and then charging advertisers for access to the millions of people who use it every day. Facebook is another giant, while Twitter is still trying to work out how to monetize its traffic, but there are thousands of other companies that give away products and services.

Until recently the gaming industry has avoided this model, with sufficient numbers of people willing to pay for games to render such concessions unnecessary - if it ain't broke don't fix it. But then along came mobile and social gaming, which is much more fleeting, superficial and casual, meaning people are less inclined to pay serious money in order to partake.

Social gaming, such as Farmville on Facebook, used the freemium model from the start - allowing users to play for free, but then offering virtual goods and other in-app purchases. But mobile gaming seemed to have mostly escaped this this need, by establishing a much lower average price.

New data from app-watcher Flurry, however, reveals that on the Apple App store in the US at least, there has been a rapid transfer of mobile gaming revenue from the premium to the freemium model. In January almost two thirds of the revenue from the top 100 grossing games came from premium games, with a third from freemium. Six months later those two roles had been completely reversed. 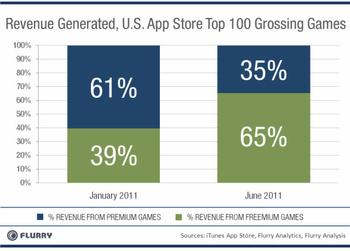 Flurry observed that only a very small percentage of people who play free games ever spend any money on them, but those that do sometimes spend into the tens of thousands of dollars. Also, because the games are free, they get downloaded by a lot more people and lend themselves to the kind of viral spread you see in social games.

Nielsen has also recently published some data on US mobile apps, which confirmed that gaming is the most popular category, although not by much, over weather, social networking and navigation. The study also found that 93 percent of app downloaders would be willing to pay for a game, which suggests that the jump in freemium revenue is not necessarily a result of buying fewer premium games. Perhaps people are just spending more on these in-app purchases. 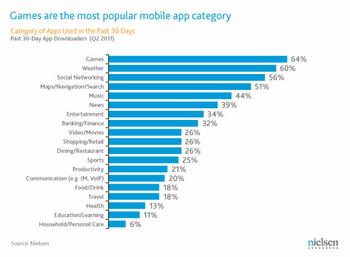 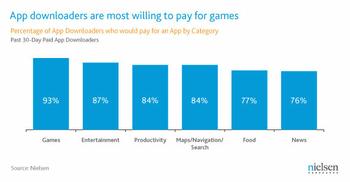 The fact that Flurry's figures are drawn from arguably the most mature market of all - US iPhone users - implies this trend is likely to apply to the broader market, both in terms of geography and platforms, before long. Although iPhone users remain the most committed gamers. 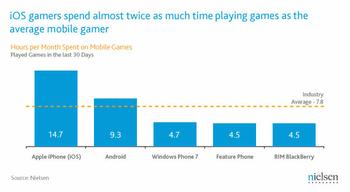 It's already established fact that Android users are less inclined to pay for their apps, and in developing countries a lower barrier to entry is likely to be even more of an advantage. The most successful games developers of the future could well be those who provide the most easy and compelling reasons to spend money while playing.