What do the personal navigation device and the notebook markets have in common? They're both threatened by losing customers to smartphones. So it makes sense for a company from each sector to get together and launch a smartphone.

That was the plan a year ago when Garmin and ASUS (for some reason not capitalised in the hybrid name) formed Garmin-Asus and launched a Windows Mobile phone with an emphasis on satnav. Now we don't know about you but that launch and, in fact, the entire existence of the joint venture passed us by, so it's safe to assume they haven't set the world on fire so far.

Unperturbed, Garmin-Asus will unveil a couple of new phones at MWC next week, included its first foray into the Android market. The nüvifone A50 (pictured) is a 3.5 inch HVGA capacitive touchscreen phone, with an emphasis on not only satnav, but on location-based services in general. It claims a superior GPS service and comes with maps pre-installed (on-board).

"The A50 brings premium navigation features to the Android operating system, offering users a seamless location based experience along with access to the wealth of applications that the platform affords," said Benson Lin, VP and GM of ASUS' personal mobile devices business unit.

"Location is relevant to everything you do," said Cliff Pemble, Garmin's president and COO. "The A50 integrates navigation and GPS functionality throughout the device, which gives customers the versatility and reliability they need as they navigate their day."

Garmon-Asus hasn't given up on Windows Mobile, however with the M10 sporting WinMo 6.5.3. While it will share many features with the A50, the M10 is being positioned as more of a professional productivity tool, which is consistent with the market Microsoft is focusing on for WinMo, at least until version seven comes out. 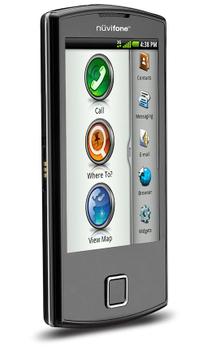