A new bundling offer from internet retailer Amazon sounds like a version of the company’s AutoRip aimed at books. The new service is called Kindle Matchbook and it will launch in the US in October. Amazon says that “for thousands of qualifying books, your past, present and future print-edition purchases will soon allow you to buy the Kindle edition for $2.99, $1.99, $0.99, or free”.

Amazon’s new Matchbook service will go back as far as 1995, when the company opened its first online bookstore. The BBC reports that this service is likely to expand to other countries following the launch of the US service but no timescale for such a roll out is known. At launch over 10,000 books will be included in the bundling offer from publishers including Harper Collins and Houghton Mifflin Harcourt and authors like Michael Crichton, Ray Bradbury and Colleen McCullough. 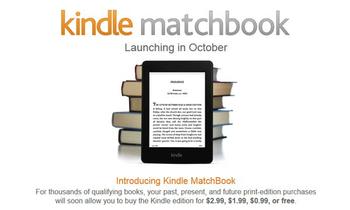 Book industry experts have questioned whether this physical/digital bundle will be as popular as Amazon’s AutoRip music CD service. Philip Jones, editor of trade publication the Bookseller magazine told the BBC “I'm sceptical about whether the reader actually wants it.” He continued, “As far as I can tell most people read in one format, so they choose print or they choose digital and it's quite rare that they read both.” The extra fee for the service of up to $2.99 could also make a difference to its adoption.

MP3 ripping music service AutoRip came to European customers in June this year and offered Amazon customers who bought (and had previously bought) from a wide range of qualifying CDs a free MP3 version of the same. Actually some people have found that they can get music from expanded versions of the CDs they have bought with several more tracks than on the physical CD that arrived in the post.

From 30th September a new and improved Kindle Paperwhite will be sold by Amazon.com. From the sounds of it there are improvements to most aspects of this device but the price will remain the same $119 (for the Wi-Fi version with ads). Amazon said “the world’s best-selling e-reader—Kindle Paperwhite—is getting even better”. 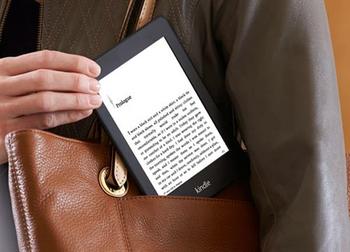 The new Kindle Paperwhite will provide:

The software side of the Kindle has also been tweaked and improved for user utility and friendliness, says Amazon. Software and interface improvements include; Kindle Page Flip, Goodreads Integration, Kindle FreeTime, Vocabulary Builder and Smart Lookup. All of which can’t be complained about unless you recently bought the older version of the Paperwhite.

They use a new faster and lighter component technology called 'Print-Color E Ink'.

The first waterproof Kindle arrives October 31st with a 7in display and a £230 price tag.

At the same price it is thinner, and lighter, with twice the memory.

Myss_tree
You can run up a far old bit of expenditure if you start adding all the accessories as well.

Don't buy the official accessories then - 3rd party ones are invariably cheaper or more full featured. Plus, apart from a light and a case, what other accessories are needed?

Myss_tree
No card slot of any description? Not everyone is sold on the cloud.

Card slot would be a useful idea IF you're one of those folks who buys hundreds of thousands of books. The original sales point of the Kindle was that you could store “thousands” of books on it. Now I just checked my one and I figure that my 139 books take up around 100MB of space, so just under 1M/book (very rough and ready figure). In which case I should be able to stick just over 1350 novels of the current size on my old gen 4 model. And even at Amazon's discount pricing that's a very sizeable chunk of money! :o

Also, the majority of the books on my Kindle were never anywhere near Amazons Kindle cloud. Baen and other eBook shops sell titles - many of them DRM-free - at reasonable rates. Buy one of those and in some cases it's even in Kindle file format, if not then Calibre (free!) will happily convert them for you - assuming that your ebookshop won't let you have it in some Kindle-friendly format like .mobi. Once you've got your files, it's a matter of seconds to hook the Kindle up to a PC (Windows or Linux) and upload/download as desired.

In which case, unless you're talking either about the “Fire” model Kindles, or the older ones that could play MP3's, I fail to see the utility of a card slot. Adding one just makes the device more expensive and the majority of folks won't use it anyway.
Posted by Saracen - Wed 04 Sep 2013 16:18
Well, interesting. When (and if) it launches in the UK, I'll take a hard look at this. It just might convince me to start buying my books from Amazon. Maybe.

But only if, first, the range of books is good enough, AND free. I am not, on principle, paying to buy a book and then paying for a Kindle version of it. Paying for a DRM-locked Kindle-only version? So if I switch from Kindle to, well whatever, I can't use it? Nuts to that.

I buy a lot of books. My “library” currently consists of several thousand titles, and I've added two hardbacks and five paperbacks in the last week or ten days. But so far, none of my books have been bought from Amazon, and neither of my Kindles have Amazon licenced (and locked) content on them. I like the Kindle a lot, but if it was a choice between paying for ther locked content or giving up the Kindle, it's bye-bye Kindle. Fortunately, it isn't.
Posted by kalniel - Wed 04 Sep 2013 16:20
I've been waiting for this since e-books were announced from Amazon, and have not considered an e-book reader until this was the case.
Posted by Saracen - Wed 04 Sep 2013 16:24

Myss_tree
You can run up a far old bit of expenditure if you start adding all the accessories as well.
No card slot of any description? Not everyone is sold on the cloud.

As crossy said, what accessories?

I added a case for each of mine, at about £8 each. I don't need a light, but I gusss that could add a couple of quid …. like the one the wife bought me.

As for expansion cards, I have a vast amount of material on mine, including some very large PDF's, and am nowhere near capacity. I'm not even near half of it. Each Kindle takes about 4000 books (in my versions). And I have NOTHING stored on any could service, Amazon or otherwise, and no plans to change that. Never needed expansion cards, either. For a tablet, yes. Kindle, no.