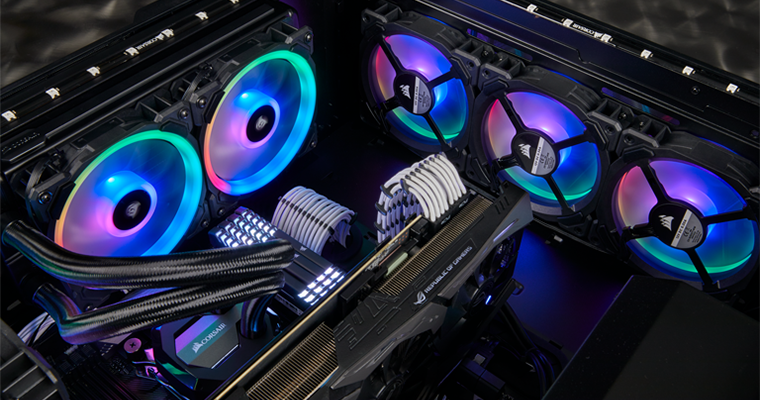 Corsair, ever the proponent of red, blue, and green lighting, has today announced a new addition to its family of RGB cooling fans: the LL Series.

Coming as ever in 140mm and 120mm flavours (both 25mm depth), the standout feature of the LL Series fans is its 16 independent RGB LEDs, which are divided into 12 around the outer loop and four around the inner loop which encloses the central hub and motor, which here uses a hydraulic bearing design. When paired with the Corsair Lighting Node Pro lighting controller and Corsair LINK software, the LEDs can all be independently controlled with a variety of effects and patterns that can be customised, including the ability to have them respond to system temperatures.

Physically, the fans have a black outer case while the loops and nine blades come in a translucent white to help reflect the LEDs. Their 4-pin connector means they are PWM-compatible.

The two fans are available to pre-order now for £24.98 for the 120mm and £29.99 for the 140mm. However, Corsair is also selling the fans bundled with the Lighting Node Pro: A dual-140mm bundle is priced at £74.99 and a triple-120mm bundle will set you back £89.99. The Lighting Node Pro supports up to 12 Corsair RGB fans or eight RGB fans, all of which can be controlled through Corsair LINK. Different fan models and strips cannot share the same channel, however. The fans and bundles come with a two-year warranty.