A week or two ago we saw a comprehensive leak of the AMD Ryzen 9 3900 CPU, which was detailed in a motherboard maker's documentation. Now this very processor, alongside the Ryzen 5 3500X has become an official AMD listed product. However, there are a couple of snags with the new duo, from the point of view of enthusiasts and individual PC builders; firstly both the Ryzen 9 3900 and Ryzen 5 3500X are for system integrators or OEMs only, secondly the Ryzen 5 3500X is only being distributed in China, at least for now. For this reason, we don't have prices and it is hard to pinpoint availability for these CPUs.

Table modified from AnandTech, which currently lists the Ryzen 5 3500X as being SMT enabled (6C/12T).

As postulated previously, AMD appears to have tuned-down the base/boost clocks of the 105W Ryzen 9 3900X to create the otherwise identical 65W Ryzen 9 3900 CPU. 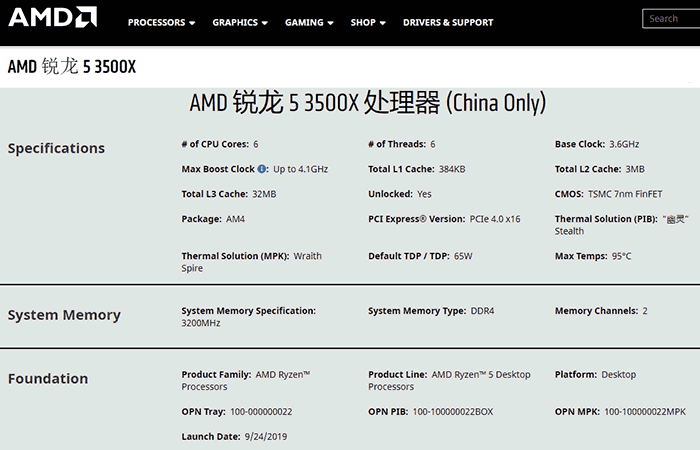 Interestingly, as per prior rumours, the Ryzen 5 3500X is confirmed to not offer SMT by the AMD China site, as you can see via the link and the screenshot, above. There are also rumours of there being a Ryzen 5 3500, and various listings in India, but AMD saw fit not to officially introduce it right now.

albert89
I remember when chip TDP's were 55W and lower for desktops.