Intel has opened its third 10nm fabrication plant, Fab 42 in Arizona US. The recently celebrated its 40th year of manufacturing in Arizona and took the opportunity to announce that Fab 42 was up and running and producing Intel's "newest generation of leadership products," destined to power "hundreds of millions of computing devices worldwide". 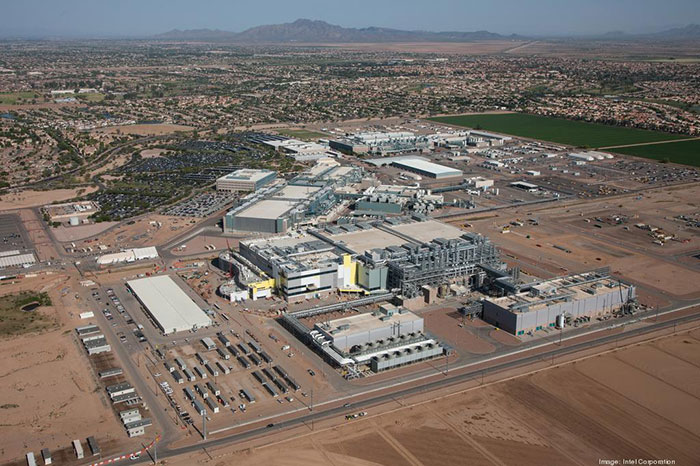 Intel CEO Bob Swan wrote a piece about the anniversary and opening up of Fab 42 on AZ Central. He recounted how Intel's first silicon wafers came off its Fab 6 plant in Chandler, Arizona back in 1980. Now Arizona is one of Intel's largest manufacturing sites with 12,000 employees.

The leasing-edge Fab 42 is located in Ocotillo and its construction helped create 10,000 Arizona jobs. Now it is up and running there are 3,000 high-tech, high-wage jobs at the facility - with salaried support engineers, equipment technicians and more. With the >$7bn investment in readying Fab 42 for 10nm complete, Intel's Arizona operation has become its first mega-factory network (with close to 900,000 square feet of manufacturing space).

Intel's road to opening Fab 42 seems to have been quite a long one. Construction began way back in 2011 and completed as far as the building was concerned in 2013. However Intel decided not to use the facility for the contemporary 14nm process and it wasn't sure about sustained demand. In 2017 it decided to prepare Fab 42 for 7nm but before this plan was actioned it was decided to prepare it for 10nm - to cater for more immediate demand.

As for 7nm, this summer Intel told shareholders that its 7nm process parts will be delayed until 2022. Behind the delay it is said that a technical difficulty will take between six months and a year to correct.

Arizona's Fab 42 is Intel's third 10nm fab and adds to the capacity output from its Oregaon and Israel 10nm plants.

Previously its statement of intent was only to be found in an 'Insider' video from May.

Offers up great Geekbench scores but how extreme was the cooling solution?

will19565
Yeah, I was wondering that I presume that the author was trying to say blurring edge?