Today, Intel provides a few more details about the upcoming chips, including models and pricing, so let's get sharing before the full performance reveal on March 30. 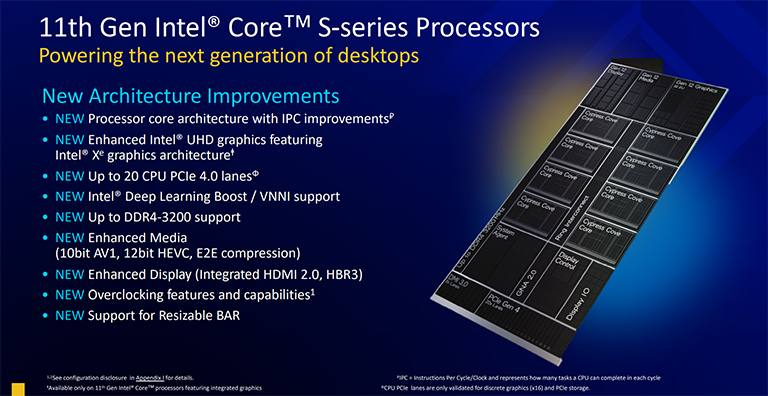 We know RKL-S chips use a derivation of the Sunny Cove CPU architecture first available on Ice Lake mobile processors, though it is backported from a 10nm process to 14nm and called Cypress Cove this time around. There's more per-core L1 data and L2 cache, deeper buffers and a wider execution unit, which all combine to offer, Intel says, an extra 19 per cent IPC. Intel mates these cores with all-new Xe Graphics for the majority of 11th Gen desktop processors.

14nm is used because it supplies enough mature silicon - it's been around in some form or another since 2014 - for Intel's desktop aspirations. Leading-edge 10nm is present in the latest Tiger Lake mobile-optimised architecture because it is a better fit for the elevated power-performance-area (PPA) metric required on laptops and mobile devices. 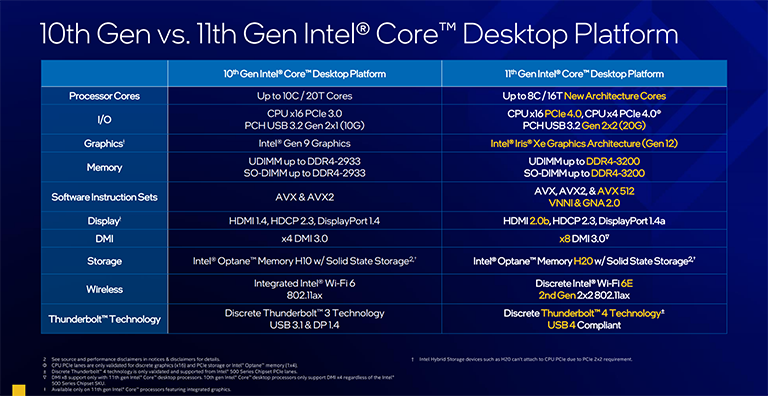 Understanding the new CPU cores are larger than previous generations - they were designed for 10nm - the clear downside to this fabrication-backporting approach is that maximum CPU core-and-thread count drops from 10C20T on present Comet Lake to 8C16T on Rocket Lake. Intel says the gains in IPC will mostly make up for the performance shortfall in heavily-threaded applications, whilst the same IPC improvement ought to enable this generation to reclaim the gaming framerate crown. Compare this to the maximum 16C32T on the most recent mainstream (IGP-less) Ryzen chips

RKL-S also updates video outputs and introduces PCIe 4.0 and has provision for an extra four lanes devoted to NVMe storage. Though based on the same LGA1200 socket as Comet Lake, the chip giant has released 500 Series motherboards to extract the full potential of the 11th Gen processors. 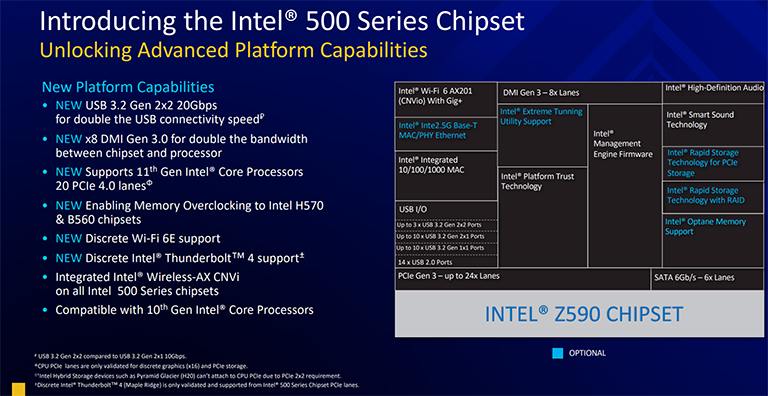 Be aware that while 11th Gen chips will work on Z490 boards with a BIOS update, there is likely no provision for the extra four storage lanes. The Intel 500 Series, meanwhile, offers a fuller roster of features and benefits, including double the bandwidth between processor and chipset, integrates USB 3.2 Gen 2x2, WiFi 6E, Thunderbolt 4, and the option for 2.5G Ethernet. It's worth knowing that Z590 continues to use PCIe 3.0 for its 24 general-purpose chipset lanes, so it is no better than Z590 in this regard.

Being based on the same platform does have benefits as 10th Gen chips will also work on 500 Series boards, but as expected, users may not have access to all the board's features. Interoperability without full feature compatibility. 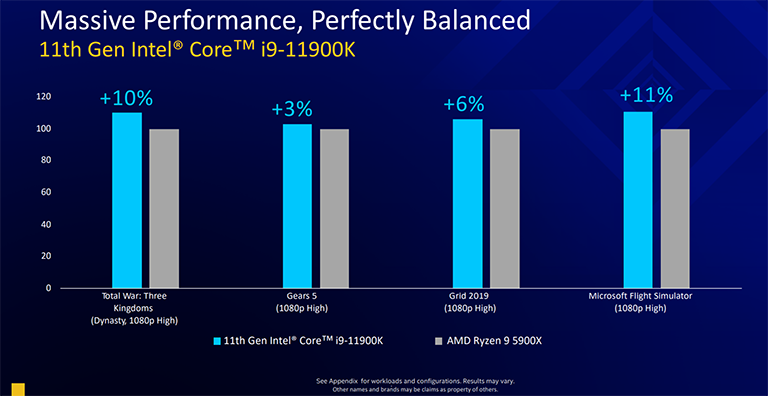 Since the original announcement in January, Intel has revised gaming performance predictions a touch. Internal testing shows the top-line Core i9-11900K to be faster than rival AMD Ryzen 9 5900X across a few titles. We'll put these assertions to the test for March 30.

As expected, Intel also believes 11th Gen to be a better gaming CPU than the best of 10th Gen by a larger margin. We actually tested an early sample on a Z590 board equipped with an immature BIOS and found this not to be the case; Intel and its motherboard partners have a lot of work to do in the next two weeks. 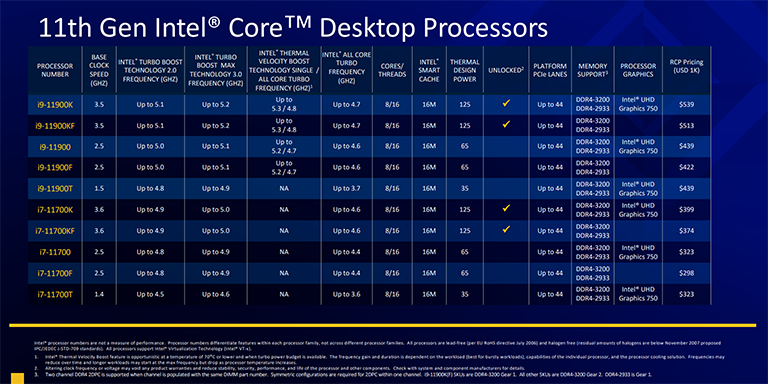 All told, Intel releases 19 new 11th Gen chips split over familiar Core i5, i7 and i9 families. Note there is no Core i3 (RKL-S) this time around... at least for the time being.

Focussing on the top first, the champion part is the Core i9-11900K housing 8C16T and running at an all-core 4.7GHz and peak 5.3GHz under Thermal Velocity Boost conditions. Xe Graphics are officially branded as Intel UHD Graphics 750. Pricing is set at $539, which is over 10 per cent more than the SRP of the 10-core Core i9-10900K.

Various lower-power models continue to exist, and our pick of the Core i9 cohort is the 11900 operating at an all-core 4.6GHz whilst consuming a nominal 65W. K-suffixed models remain unlocked.

The interesting observation is that Core i7 uses the same core-and-thread count as the top-line parts. They are only different insofar there's no frequency-enhancing TVB support and peak frequencies are a little lower, as is price.

Is it really worth paying $216 extra for the Core i9-11900K when the Core i7-11700 is almost as good? The enthusiast will decide, especially when the performance is inevitably tallied up against rival Ryzen 7 chips from AMD. 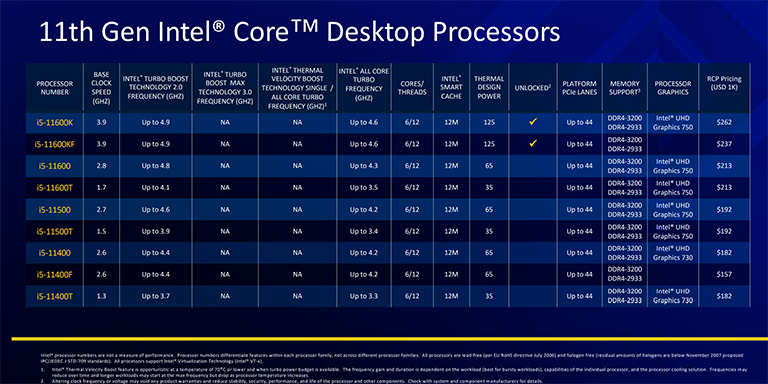 All Core i5 chips remain on 6C12T topology and offer the same 12MB of L3 cache we see today. Peak frequencies are similar to 10th Gen, as well, whilst pricing is identical. Performance advantage will emanate from increased IPC above all else.

It's good to see Intel provide official DDR4-3200 speeds across the entire stack. Most enthusiasts run their memory at faster speeds right now, but the improved memory controller within 11th Gen gives Intel enough confidence to go all-in on the faster speed that matches AMD. 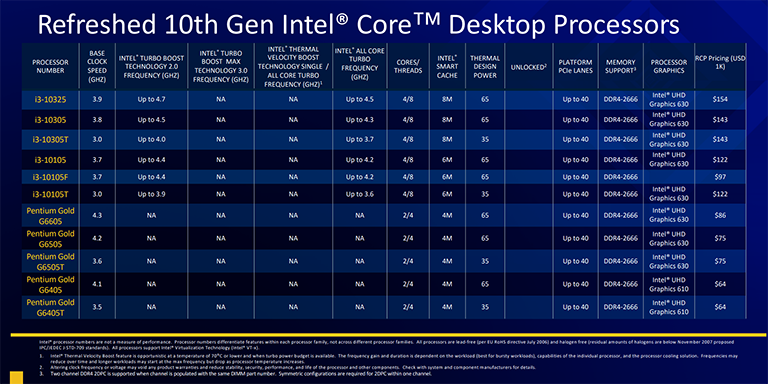 It's not all about 11th Gen, however, as the 10th Gen Core i3 and Pentium line-ups see an overhaul. The new models are suffixed with '5' to differentiate them from incumbent solutions. Peak frequencies are ever so slightly higher whilst pricing remains the same. One can argue there are now way too many SKUs.

We'll have the full architecture deep-dive and performance numbers for you on March 30, but up until then, are there any surprises in the 11th Gen models and pricing? Let us know your thoughts in the forums.

Lays the groundwork for shifting tasks between high performance and efficiency CPU cores.

3dcandy
That's not confusing at all…

Which bit, the differential between the i9 and i7? Seems odd they're all 8/16, I mean they could at least disable the hyperthreading on the i7 so the product stack is actually different in a meaningful way so they don't confuse consumers. Looking at that die space though, if the KF model has no graphics, why don't they make the redundant space more useful and add two more cores in there for 10/20? Instead of wasting silicon on useless graphics most people don't use at that level of CPU.
Posted by 3dcandy - Tue 16 Mar 2021 16:04

Iota
Which bit, the differential between the i9 and i7? Seems odd they're all 8/16, I mean they could at least disable the hyperthreading on the i7 so the product stack is actually different in a meaningful way so they don't confuse consumers. Looking at that die space though, if the KF model has no graphics, why don't they make the redundant space more useful and add two more cores in there for 10/20? Instead of wasting silicon on useless graphics most people don't use at that level of CPU.