Intel has published a developer guide for its upcoming 12th generation Core processors, codenamed Alder Lake. After a brief intro, the guide offers an architecture overview, talks about performance optimisations, making the most of the hybrid architecture, and provides some examples of optimisations for game engines. Within the documents, a few interesting nuggets have come to light; the upcoming ADL processor core configurations, and a warning about ADL game compatibility.

If you head on over to the linked microsite, and scroll down, you will quickly come across confirmation of the desktop and laptop SKUs that Intel has planned. Above you can see a summary diagram for the upcoming SKUs - with the desktop chips spanning processors which pack a minimum of 6 P-cores (Golden Cove), but lacking the E-cores (Gracemont Atom) entirely. They scale up to SKUs with 8 P-cores, and 8 E-cores. 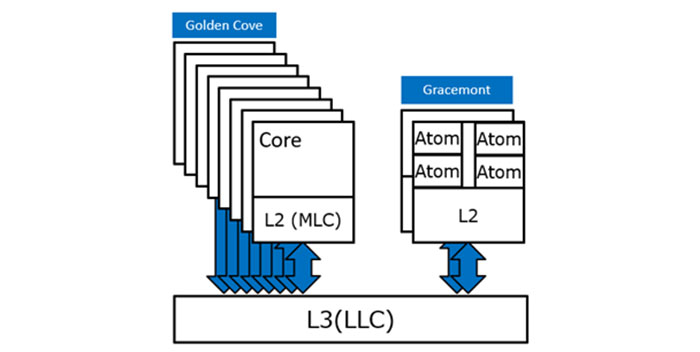 Both types of cores have their own L1 and L2 caches but will share an L3 cache with each other. The docs suggest that the cores support the same instruction sets, but the E-cores won't have AVX-512 support. However, this weekend Anandtech's Dr Ian Cutress Tweeted that he had "confirmed AVX-512 not on ADL," – in any of the cores.

It looks like all but the 'F' suffixed desktop processors will come with 32 EUs for onboard graphics duties. 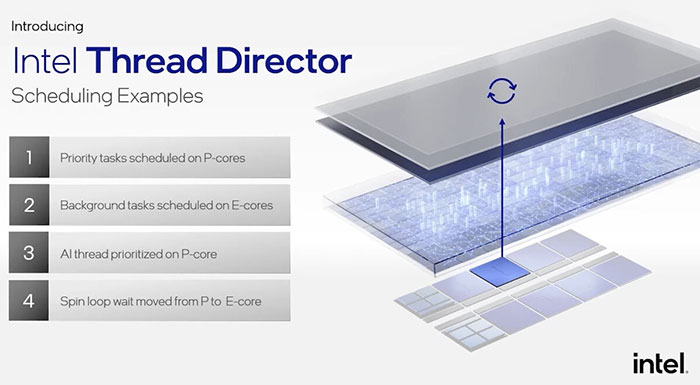 For software, Intel Thread Director will divide various tasks smartly between the different types of processor core available in your Windows 11 machine. It takes into account factors such as thread scheduling, thread priority, and thread affinity.

If you scroll down to the section of the dev guide dubbed 'next steps', to just above the 'additional resources' section, you will see Intel has added a cautious note about ADL and DRM. "If your existing or upcoming game uses a DRM middleware, you might want to contact the middleware provider and confirm that it supports hybrid architectures in general, and the upcoming Intel ADL platform in particular," says the guide. "Due to the nature of modern DRM algorithms, it might use CPU detection, and should be aware of the upcoming hybrid platforms. Intel is working with leading DRM providers such as Denuvo* to make sure their solutions support new platforms."

This effort, by developers of modern currently in service games, will probably be quite swift. However, there are plenty of older titles that still have DRM, and getting updates for them, to make them work on ADL systems, might not be so easy. Intel specifically names Denuvo as being a potential problem, but it isn't likely to be the only DRM system that could foul-up older game enjoyment on hybrid architecture processors.

Posted by Tabbykatze - Mon 18 Oct 2021 10:16
I thought Intel was continue to do a big fanfare about their AVX512 IS and that's why they've been ramming AVX2 and AVX512 down our throats for the past 3 years. Last proper data on this was a few months ago wherein it was stated that AVX512 and another feature would only be available if e-cores were disabled which was silly. I wonder if they've just fused off the components that held those areas or if they actually existed in the first place (or maybe it was true of an older ADL iteration).

I wonder if disabling e-cores will sort the DRM issue for older games but would be interesting to see how far back the ADL hybrid config issue will go.

On another note, can't wait for the reviews of what the quality of experience is like when applications switch context between e-cores and p-cores. I would expect it to be almost background to the user like it is to a degree on Arm.
Posted by kompukare - Mon 18 Oct 2021 10:22
Want best multi-core scores? A Cinebench to beat Zen3?
Use Windows 11.
Want the best gaming performance?
Restart your PC, turn of the e-cores in the BIOS and boot; or use Windows 10!
Posted by Corky34 - Mon 18 Oct 2021 10:35
Still not sold on this big/little core setup outside of mobile computing use, why not just make your cores more efficient and better at scaling from low to high workloads. It seems like a solution looking for a problem and one that involves loads of re-engineering and extra complexity on the software front for seemingly little gain.
Posted by Tabbykatze - Mon 18 Oct 2021 11:08

Corky34
Still not sold on this big/little core setup outside of mobile computing use, why not just make your cores more efficient and better at scaling from low to high workloads. It seems like a solution looking for a problem and one that involves loads of re-engineering and extra complexity on the software front for seemingly little gain.

Looks like what AMD is going to be headlining and continuing with (although they are researching big.LITTLE as well) as of their 5 years with Ryzen talk.
Posted by Corky34 - Mon 18 Oct 2021 11:45
Honestly I'm struggling to workout why Intel have gone down this route after they've done so much work on things like P and C-states, i would've thought it would've made more sense to introduce a new C-state that's optimised for background tasks/code.

EDIT: Obviously I'm not a processor design engineer so I'm likely not seeing the complete picture but it just seems like Intel are saying they can't make a high performance engine that also has low MPG so lets bolt a second low MPG engine into the car.