AMD held a special event last night in San Francisco to provide further architectural details and comparative performance demonstration of its Zen processors. Probably the highlight of 'The Path to Zen' event was the first-ever official Zen performance demo featuring AMD's Summit Ridge vs. the Intel Broadwell-E. In other segments of the presentation we learned about and saw a demo of 'Naples', a Zen-based 32 core, 64 thread server product.

Kicking off the event, Dr. Lisa Su, president and CEO of AMD, said that "The performance and efficiency of our Zen core showcases AMD at its best." She went on to detail how the company has spent the last four years building up to the Zen launch. The 'clean sheet' design of the processor has enabled AMD to increase the performance, throughput, and efficiency of these new CPUs and deliver "a 40 per cent generational improvement in instructions per clock". 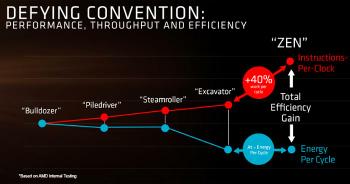 Mark Papermaster, senior vice president and chief technology officer at AMD, joined in the presentation about the background to Zen, claiming that the Zen is a once in a lifetime project with a huge potential to impact the future. It is envisioned that Zen-based CPUs will be present in systems as diverse as fanless 2-in-1s, embedded systems, high-performance computing, and the datacentre.

Desktop availability in volume is expected to be in the first quarter of 2017 but there might be some limited volumes of Zen chips shipped before New Year. A laptop processor combining Zen cores and integrated graphics will be introduced next year.

We don't have the test numbers to share with you today, just the testing methodology and overall result. For its comparative performance demo AMD ran an 8-core, 16-thread Summit Ridge desktop processor (engineering sample) against a "similarly configured 8-core, 16-thread Intel Core i7 Broadwell-E processor" launched in June. To provide a level playing field, both system CPUs ran at 3.0GHz. The two machines ran multi-threaded Blender rendering software to complete a specific task. The result? AMD's Zen-based processor outperformed Intel's chip. No chart or detail about the margin of the win has been shared by AMD at the time of writing.

In the demo of 'Naples', this Zen-based 32 core, 64 thread chip was shown off running in a dual processor server running the Windows Server operating system. Naples is scheduled to launch in Q2 of 2017.

Further information about the Zen architecture will be provided next week at Hot Chips 28.

mattburnzy
I feel like AMD thinks we get excited with these vague tidbits…..

They're not meant for us, they're meant for investors, and they're not meant to excite, they're meant to reassure. If you're sunk money into AMD at any point over the last few years you're probably beginning to wonder where the return on investment is going to come from. This presentation was clearly aimed at convincing investors that AMD's tech roadmap is primed to return them to healthy profitability. Given AMDs last few years, a high end desktop processor that competes with Intel's extreme platform is a welcome claim - only question now is whether AMD can deliver.
Posted by shaithis - Thu 18 Aug 2016 14:59
Oh, Zen, I'd almost forgot about these…..
Posted by The Hand - Thu 18 Aug 2016 15:12

Desktop availability in volume is expected to be in the first quarter of 2017 but there might be some limited volumes of Zen chips shipped before New Year.

Hmm, the launch window keeps slipping, though I can't imagine AMD daring to delay it much more. APUs out in Q2 perhaps? Though these too could be delayed to let the Zen CPUs settle in sales wise.
Posted by watercooled - Thu 18 Aug 2016 15:36
I find a couple of points about this quite reassuring; first they have now explicitly said the 40% IPC improvement is vs Excavator, I'm not sure if they have before and there are still people claiming it was vs Piledriver.

Second, they seem to have compared it pretty fairly to an equivalent Intel chip - when I read the brief I half expected them to be comparing to a 4C8T i7 - to see it compared in a multithreaded application to a workstation class Intel processor with an identical number of cores is a relief.

Of course we still don't know final clocks or measured power consumption but the graph does at least state energy per cycle is on par with Excavator, which is quite an efficient core. And 3GHz gives us at least a minimum of what to expect; the base frequency of the 8 core Broadwell-E i7 is only 200MHz higher.