Over the weekend there was a special event in Wuhan, China called the 2016 Galax & Nvidia Carnival, this was apparently the eighth year for the show. At the event Galax showed off various hardware including its HOF range of cards, and there were various presentations and an OC contest too. 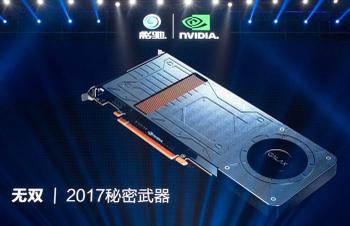 One of the highlights of the Carnival event was the teasing of a Galax branded GeForce GTX 1070 graphics card in single slot form factor. As you can see in the pictures taken by PCOnline, this is indeed a slim card. It looks pretty handsome in its metallic livery and sleek design. The design features an air intake on its face exposing copper cooling fins, and a fan further along the card, installed on an 'extension' beyond the length of the PCB.

As mentioned above, Galax referred to this card as its "secret weapon" for competing in 2017. Unfortunately we didn't learn any of its vital specs to discover what differences, if any, this card will offer in performance compared to reference designs. Its connections can be seen in some photos and are limited to; 1 x DisplayPort, 1 x HDMI, and 1 x DVI, plus the requisite 8-pin power connector. 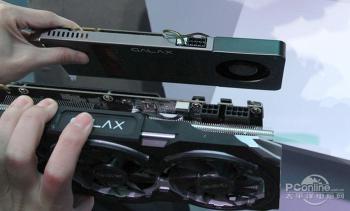 Some good news is that the slim-line single slot card will be launched in early 2017 and that its price is competitive, said to be around $379.

One more nice news nugget from the 2016 Galax & Nvidia Carnival was that a Galax GeForce GTX 1060 HOF GOC managed to hit 3010MHz (3.01GHz) on its Pascal-based GP106 core. At this record breaking speed its pixel fill rate performance was said to be better than that of a GTX 1080…

aidanjt
Shame about the DVI port chewing through so much port space.

aidanjt
Shame about the DVI port chewing through so much port space.

Yeah, maybe package a HDMI-DVI dongle instead, and use the space for a 2nd HDMI or Displayport.

Apart from the fact that I like the DVI connector, why would you ever prefer HDMI over DP? If you need a dongle it should be a DP->DVI dongle.
Posted by darcotech - Mon 19 Dec 2016 13:36
Ideally if you have two monitors, you will wnat that they use the sabe type of cable to be connected to cg. Here we have three different ports.
But one slot cg are good for some usage scenarios.