The latest milestone release of the AMD graphics card drivers has been delivered. AMD Radeon Software Adrenalin 2019 Edition (v 18.12.2) has a multitude of new features and includes support for new games, performance updates, and stability improvements too.

After a read through the online and downloadable information and watching several new official AMD YouTube videos about the latest driver I think the biggest new feature is that users will be able to stream and play their PC games on a mobile device via AMD Link. The functionality can go beyond gaming, by providing access to the Windows desktop and apps on your touchscreen iOS or Android phone or tablet, but it has been primarily designed for gamers. If you have one of the smartphone-based headsets like the Samsung Gear VR or Google Daydream then AMD Link can work with that too.

AMD Link, once set up, can turn off your PC display as you enjoy your game on the mobile device with either on-screen controls or Bluetooth controller, for example. AMD's game streaming is capable of up to 60Hz 4K - depending upon the usual things like GPU, network connection, etc.

If you are thinking this is a competitor to the Steam Link app or Nvidia GeForce Now, you would be partly correct. You must consider that the Steam Link hardware box has been discontinued, it is no longer available for iOS, and AMD asserts that its own app has a 44 per cent faster response rate than Steam Link (the app, not the box).

AMD Link doesn't just allow the above, it is also an app that allows quick touchscreen access to tools such as WattMan, is now capable of acting on voice commands 'Hey Radeon'. Commands are limited to Radeon ReLive and performance metric information. 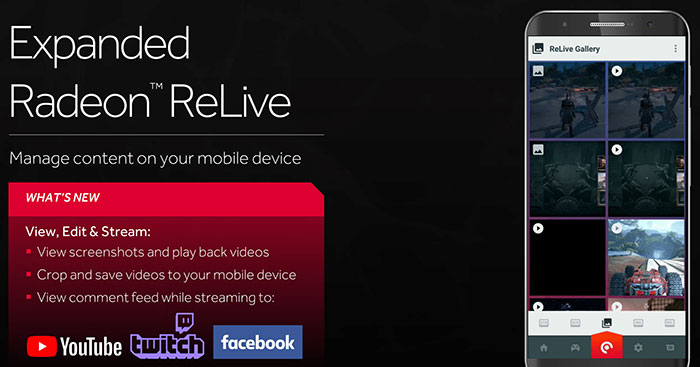 Radeon Overlay now has enhanced sync controls in the display tab and you can quickly find these settings plus FreeSync, per game colour settings, Wattman, performance metric visibility controls all in the overlay. 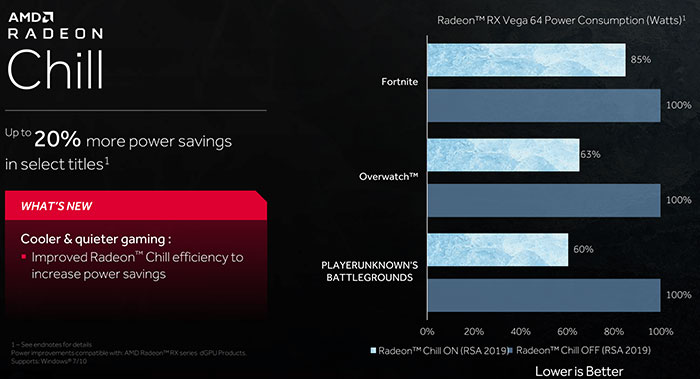 Outside of Wattman there are other auto-tuning options thanks to features such as the Radeon Game Advisor, Radeon Settings Advisor, and Radeon Upgrade Advisor - see the video below.

Other headlining additions to this latest AMD Radeon driver include support and optimisations for a quintet of games:

Vulkan support has been expanded with four further extensions supported by the API now accelerated on Radeon. Lastly, there are a dozen or so fixed issues and remaining issues, which you can pick through in the release notes. The new AMD driver (v 18.12.2) is available to download directly (.exe files) below.

Posted by darcotech - Thu 13 Dec 2018 20:31
Did you guys installed it yet? Any feedback?
Posted by tag75 - Thu 13 Dec 2018 21:09
I have for my r9 fury nitro but need to test it but I get enhanced sync and vsr.
Posted by Lordhawkwind - Sat 15 Dec 2018 20:02
<After doing some further testing my conclusion is this driver is <poor>. Auto under volt is basically power save mode and savages your performance. Auto overclock GPU & memory does absolutely nothing so is a waste of space. The fan curve is an absolute <admin removed> joke TBH. Set the curve to 60% at 75c and it went to 100% as soon as the game started (3330 rpm) and stayed there. Whatever figure I put in above 50% yielded the same result WTF?

With the previous drivers I could cap the fan speed which would affect temperature and performance but at least the fan noise was bearable. With these drivers AMD seem to think we want to run the fan at 100% all the time for a meager performance increase. Sorry AMD you're wrong give me less noise not more.

For some reason, might be because I have the original blower card, I get no option to run fan speed at 0. I see absolutely no benefit in this release and seriously wonder why AMD even bothered to make a big thing about it other than they've got absolutely nothing else they can talk about in the GPU space.

To say I'm disappointed with this POS is a major under statement. All hype and no delivery. Where are the primitive shader gains you promised? DSBR and all the other Vega features that don't work or aren't implemented? Terry Makedon should hang his head in shame after releasing these drivers and maybe it's time he walked the plank as he seems to be as useful as a chocolate fire guard. Sad times to be an AMD Vega owner to be sure.

I'm rolling back these drivers and maybe in a few months if they can fix all the faults in this release I might download another set of drivers but I won't be holding my breath TBH as I'm not sure they have the talented engineers to pull it off as they've all <gone>to Intel
__________________
Posted by Zwicked - Sun 16 Dec 2018 18:24
I have a Sapphire Nitro+ Vega 64 and after testing the auto overclocking features I have found that in balanced plan with auto under-volt it runs my card as fast as in turbo mode but with the same power draw as the balanced plan (240W maxed out), so I am quite happy with that. Pretty much a bonus 4-5% performance.

I noticed while spamming through the different settings changing, between plans, running benchmarks, that they do not always apply properly. It sounds to me like you were running power save plan then undervolted that hence the poor performance. Try hitting reset to restore default settings. Reboot the pc then swap to a custom profile >>> enable auto under-volt >>> yes >>> hit apply and then see how it affects your performance. I have not tested the fan profiles as my card runs quiet even if I set it to turbo mode.

The overlay function also seems to work better for me now also. Before it was a bit hit and miss whether it wanted to work on older games. I read the memory overclocking works well for Polaris cards and also the auto overclock tends to be worse than stock as the card continually throttles. With my Vega, the memory overclock did nothing and the overclock gave worse results than the standard balanced power plan due to throttling.
Copyright © 1998 - 2020, HEXUS.net. All rights reserved. HEXUS® is a registered trademark of HEXUS.