Nvidia has released an updated version of its PhysX SDK. Version 4.0 is now available to anyone interested and since it went open source recently, developers can implement this physics engine on GPUs that aren't from Nvidia's GeForce range. Thus, in the not too distant future we may see GPU acccelerated PhysX effects available to AMD GPU users (without hacking/fiddling) and on the latest consoles. 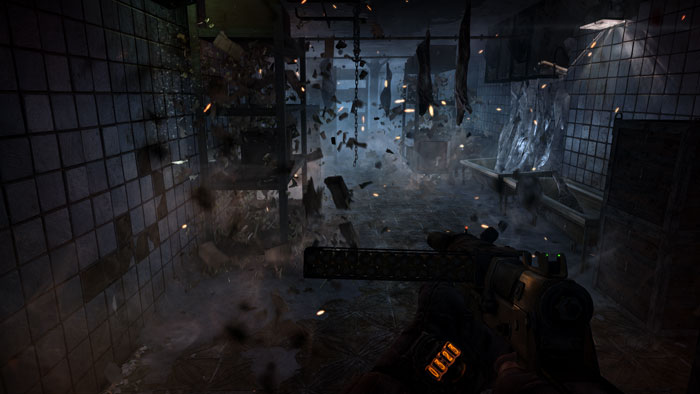 There is quite a long list of AAA games that feature PhysX enhancements, however it seems unlikely that developers will revisit them to implement AMD GPU-friendly PhysX code. Going forwards, PhysX is already integrated into some of the most popular game engines like Unreal Engine and Unity 3D.

PhysX isn't just about gaming though, and Nvidia's latest news and blog post about PhysX 4.0 talks about how the free, open-source physics solution can handle large virtual environments and how it "solves some serious challenges" in the areas of; AI research, robotics research, self-driving car simulations, HPC physics simulations – as well as with gaming development.

New features in PhysX 4.0 are as follows:

The PhysX SDK 4.0 comes with a simple 3-Clause BSD license for use with Windows, Mac OS X, iOS, Android, and Linux.

Nvidia realised their current stock value and is trying to save face after their not so consumer friendly cash-grabbing so that they seem more like the good guys now??

Well i can tell you already that something like that will not be nearly enough. Also like you guys said this comes really too late.
Posted by nobodyspecial - Fri 21 Dec 2018 22:12
ROFL, AMD isn't good guys either. No company is your friend, period. AMD just prices stupid because management has no idea they are in business to make MONEY (lost 8B in the life of the company, that is the worst I've every seen in a company alive for decades…OUCH - literally NEVER made money in their history, rather lost 8B). They have to earn 8B before the actually MAKE money in almost 50yrs. Can you believe a company is still in business after 48yrs and losing 8B during that time? Maybe it's true Intel keeps them alive by buying shares or something…LOL. It was bad enough waiting for amazon to finally make money, but at 50yrs this is ridiculous. That said, buy their stock (like I did), as the stock price will go up to $40 probably before end 2020 or before as server stuff kicks into high gear at 7nm (maybe 5nm too if TSMC is to be believed). Intel has a tough road for the next 18-24 months, which means AMD stock holders will rejoice at current prices. Just jump out as soon as rumors or benchmarks of the servers hit, as I'm not sure they even know how to price a $17000 chip (yeah, they could screw that up too and piss away the 2yrs of victory). If they price 64 core ABOVE Intel, I'll be in for longer. If they go below Intel 48 core, I'm out at the first hype swing up. It's a great cpu, but only if you price it like one for NET INCOME.

Not too late for physx, it's in all the engines now, so easy going forward. I'd rather have this than freesync support as that is 2nd rate after seeing the REAL deal and playing it for a bit not to mention 68% of users are on NV, so most have gsync in the cards. Gsync is VERY impressive without freesync limits. Freesync 2 doesn't seem to FORCE much in the way of parts required either (AMD was supposed to force quality part choices for a better experience, guess not). Already bought a 1070ti, but could go either way at 7nm for sure. Depends on watts/heat vs. perf. It's hot here :) I might go AMD just to have a freesync+gsync capable pair of gaming machines (one HTPC though).

Lastly, NV isn't worried one bit about their stock. 7 rate hikes is killing the stock market from a moron fed chair. This guy lost USA 4000 dow points lost in 3 months!, Fire that bastard now, it is within trump's right per fed act, section 10, can fire for CAUSE, and I'd say 4000 dow drop in 3 months is CAUSE as that is TRILLIONS of market value. 401k's/pensions lost 15-20%. Still up a lot during trump's admin, but 4000 more was FAR better. The let obama off for 8yrs, they just hate trump and are trying to stop him. YOU'RE FIRED (c'mon trump you can do it…and you're good at it LOL).