Earlier today HEXUS reported upon the all-new Apple Mac Pro which featured, as configuration options, a choice of up to two AMD Radeon Pro Vega II Duo graphics cards pre-installed - that would deliver 4x GPUs with up to 128GB of HBM2 and 56 TFLOPs of graphics processing performance. AMD has now made its own announcement about these new Pro Vega II GPUs and published its official product pages, so it is worth a further look. 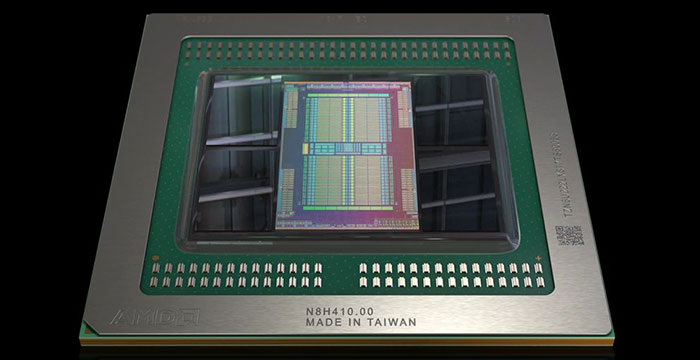 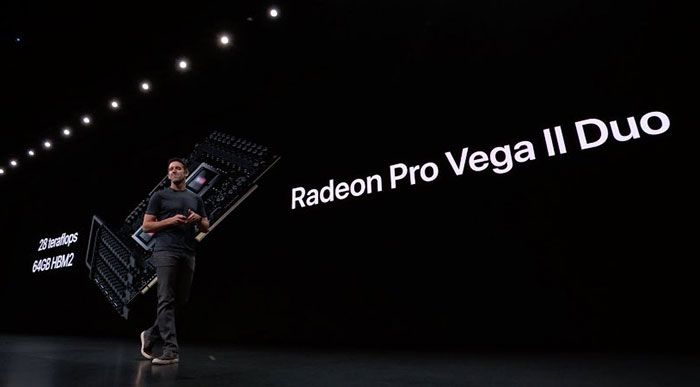 Each GPU has 64 Compute Units for 4096 Stream Processors, and supports 32GB of HBM2 memory. This is the standard spec of the Radeon Pro Vega II graphics card, but then the Radeon Pro Vega II Duo doubles it. These GPUs use an Infinity Fabric Link for fast data transfer (84GB/s) and low-latency peer-to-peer memory access - it is claimed to be up to 5X faster than PCIe Gen 3 interconnect speeds. 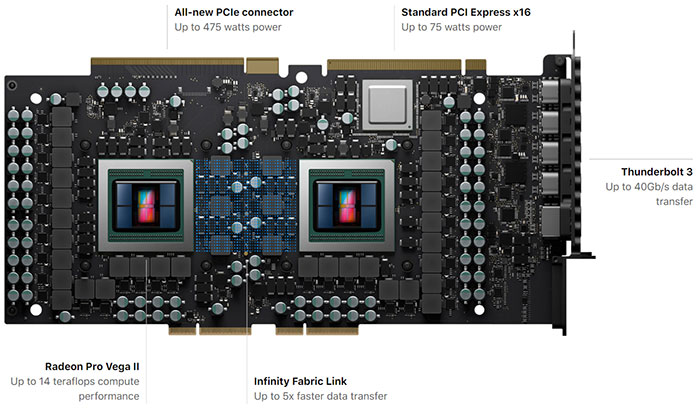 These are pro- and creator-targeted graphics cards and optimised for apps that need a lot of muscle for rendering high resolution outputs. With regards to the Apple ecosystem, the drivers offer Metal API support. If you are interested in the performance on offer from the likes of the Radeon Pro Vega II but don't want to buy into the Apple ecosystem, you will find that that card is very similar to the AMD Radeon Instinct MI60 accelerator, launched last November. However, there isn't an Instinct equivalent to the Pro Vega II Duo as yet and it may remain an Apple Mac Pro exclusive.

Xlucine
So another outing for the V7 chip? I like the look of the extra power contacts on the PCIe slot, shame it's unsuitable for consumer cases

Basically, this Radeon Vega 2 is the top end Vega for consumers.

What I'm verrrry interested in is the duo, this could be a sign of a return of AMD dual GPU on a single card designsbif the IF does it's job well…
Posted by LSG501 - Tue 04 Jun 2019 12:15
Yay for proprietary connectors….

DUO is essentially a return to the dual cards of old, nothing particularly wrong with that approach if you can get enough bandwidth, which in the case of the mac pro seems to require an extra socket…

I wonder if AMD will bring out something similar on pcie4, that should have enough bandwidth I would think. Although as much as I want to support AMD and opencl on the gpu side of things, Nvidia's cuda is just so much more practical for my usage.
Posted by darcotech - Tue 04 Jun 2019 12:32
Well it is Apple commanded part. They probably gave a lot off money to AMD so they just did what they asked for.
So Apple MacPro has world's fastest graphic card?!!
Posted by Luke7 - Tue 04 Jun 2019 13:02
AMD is getting some huge wins through contracts and Ryzen a the moment… I'm not foolish enough to say “Intel is dead” or in trouble - I'm just here hoping AMD can invest in themselves and R&D to REMAIN competitive long-term.