According to a report published this weekend, AMD is planning to launch its Radeon RX 6600 XT with an MSRP of US$349. The same source, communicating with Neowin, said that the AMD Radeon RX 6600 will sport a US$299 sticker. Both AMD's new graphics cards will come with 8GB of VRAM for those prices. There is a possibility that there will be a 4GB version of the RX 6600 too.

While these touted MSRPs might sound attractive in the current climate, please remember that the competitive Nvidia GeForce RTX 3060 (12GB) and 3060 Ti (8GB) were launched with MSRPs of US$329 and $399, respectively. In other words, MSRPs and street prices have drifted apart, quite severely, and not in the favour of PC DIYers and gamers. 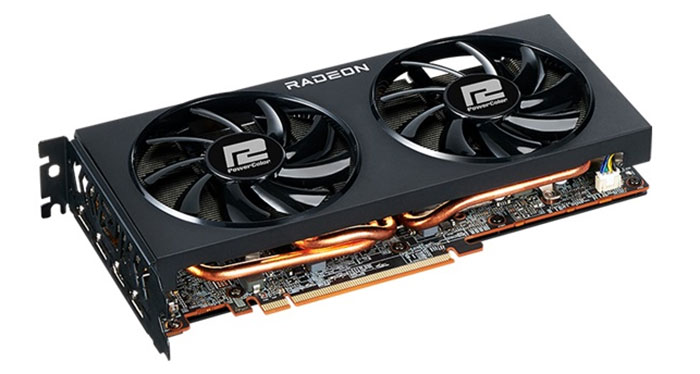 Neowin's source provided some background reasoning on AMD's pricing decision. It is claimed that initially, AMD wanted to put the Radeon RX 6600 XT MSRP $20 higher at $369, but felt that its performance / VRAM combination wouldn't be favourable compared to the flanking Nvidia products. What we can take away from this is that AMD's RX 6600 XT is nearly as fast as the RTX 3060 Ti on average, but not in games played with raytracing turned on. Thus, AMD had to adjust pricing accordingly. The RX 6600 is in a similarly competitive position vs the RTX 3060 but with the obvious VRAM disadvantage (8GB vs 12GB).

French tech site CowCotLand recently wrote an article claiming that AMD Radeon RX 6600 XT graphics cards will be priced by retailers at roughly €499, with better spec AIB models going for as much as €549. Just ahead of the weekend, the same site reported that Nvidia and partners have been stockpiling RTX 3060 GPUs "to flood the market when the new card from AMD arrives". It thinks this could be the first price war we have seen in a long time.

In our last report on the AMD Radeon RX 6600/XT graphics cards being tipped to hard launch on 11 Aug, there was talk of AMD partners having plentiful supplies. It looks like the next couple of weeks is going to be interesting for those whose upgrade / new build requirements would be sated by an RX 6600 series or GTX 3060 series GPU. As well as the reviews to look forward to, we should see some nice price action with these mass-market targeted GPUs doing battle over the following weeks/months.

According to the latest rumours, the Radeon RX 6600 XT will be unveiled this Friday, 30th July at the China Joy Expo (soft launch). The above-mentioned 11th August date is for reviews/availability (hard launch).

Before I sign off, please remember to take the above rumours from unnamed sources with a pinch of salt.

Posted by Zhaoman - Mon 26 Jul 2021 10:47
This rumour about Nvidia stockpiling cards makes no sense. If you think your competitor is about to saturate demand with a lot of stock then you would want to push as many products out as possible before their launch to dent that demand. You're in an advantageous position while your competitor's hands are tied before their launch and you'd take a sale now rather than a price war in a few weeks. It's like we can't look anywhere without there being some conspiracy these days.
Posted by lumireleon - Mon 26 Jul 2021 12:38
AMD is starting to be Nvidia with its ridiculous pricing on mid range cards. We miss the Polaris days.
Posted by DanceswithUnix - Mon 26 Jul 2021 12:57

Zhaoman
This rumour about Nvidia stockpiling cards makes no sense. If you think your competitor is about to saturate demand with a lot of stock then you would want to push as many products out as possible before their launch to dent that demand. You're in an advantageous position while your competitor's hands are tied before their launch and you'd take a sale now rather than a price war in a few weeks. It's like we can't look anywhere without there being some conspiracy these days.

That was exactly my thought. Unless they are waiting to see what AMD do for pricing, and then dump with a price drop slightly under that.

But even then, while usually dumping now and then changing the price after AMD release their card would annoy people I suspect that many would just be happy to get their hands on any half decently priced card. So would seeing a price drop just after you purchased a 3060 or ti make people mad in these times? I suspect not as much as usual if at all.

The only positive I can think is that if AMD and Nvidia are both flooding the market at the same time, then that might stop any scalpers from trying it on.
Posted by philehidiot - Mon 26 Jul 2021 13:13
Is it possible that Nvidia and AMD have come to an agreement to release simultaneously as the scalping and short supply is hurting their reputations? Or is it more likely that Nvidia is thinking less about profiting and more about hurting AMD?
Posted by CampGareth - Mon 26 Jul 2021 13:44
Do we know how the 6600 XT is meant to compare to existing GPUs? I've got an Nvidia GTX 1070 that's struggling at 5120x1440.