Cryptocurrency miners continue to show ingenuity on the path to their glittering virtual prizes. Like the NBMiner cryptocurrency mining software, T-Rex has restored up to 70 per cent mining performance on GeForce RTX 30-series (Ampere) LHR graphics cards (normally you would get about 50 per cent perf compared with a non-LHR GPU). However, T-Rex has another trick up its sleeve, allowing full use of the GPU's theoretical resources by mining two different 'brand' coins at once. 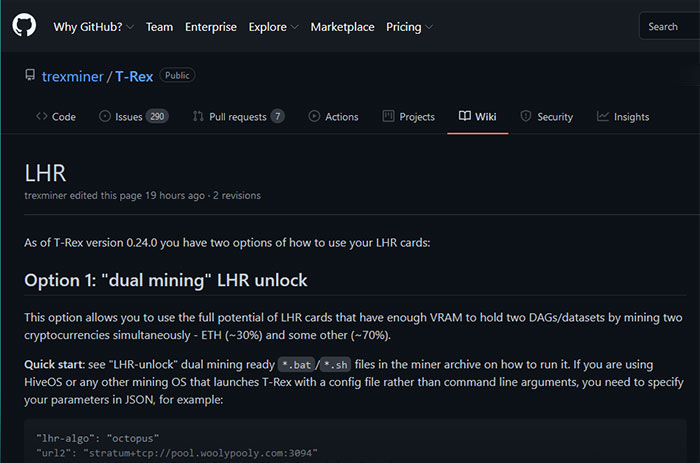 With T-Rex you can allocate your LHR GPU to mine two coins 70/30 using its new dual mining option. With this option on, T-Rex users can devote up to 30 per cent of their GPU power to mine for ETH, and the other 70 for an alternative crypto coin like Ergo (ERG), Ravencoin (RVN) or Cornflux (CFX), explains Tom's Hardware. As the app currently functions, the ETH mining GPU power has to be the smaller part of the 70/30 ratio.

Another thing you must consider when 'dual mining' is the VRAM you will need. Some combinations will require over 10GB of VRAM, so you won't be able to get by on a GeForce RTX 3060 Ti or RTX 3070, for example – but the slower RTX 3060 with its 12GB GDDR6 would be comfortable with such a task.

PC gamers looking to upgrade still face difficulty sourcing reasonably priced GPUs. However, the ETH switchover from PoW to PoS that we heard about in May could precipitate a mass sell-off of the GPUs used by cryptominers. The latest news about this tech switchover suggests it is scheduled to happen in December. At that time a "difficulty bomb" will make ETH 'unminable' and help the transition to PoS which sits behind ETH 2.0.