You are here:
Mainboard Chassis News

Motherboard makers introduced the first Mini-STX motherboards at CES last week. We saw Intel launch the platform, previously known as the 5x5 form factor, in August last year. Now both ASRock and ECS have readied Mini-STX motherboards which support your choice of LGA 1151 CPU; from humble Celeron, to Pentium, Core i3, Core i5, or even a Core i7 processor.

As it says in the subheading of this report, these Mini-STX motherboards are the smallest Intel motherboards to support upgradeable CPU choices. This form factor was originally dubbed the 5x5 by Intel as those are the approximate area dimensions of the boards in inches (similar to the size of an Intel NUC). Both the ASRock H110M-STX and ECS H110SU-02 use the Intel H110 chipset. They allow buyers to fit their own choice of sixth generation processor up to 65W TDP. 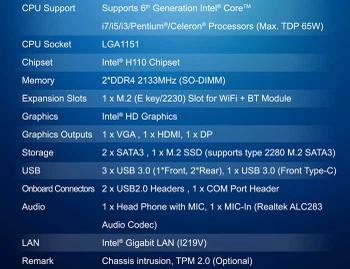 ASRock claims its example is unique in supporting standard desktop CPU fans. I've embedded the spec list graphic for the ASRock H110M-STX above. As you can see, beyond the processor choice options you can customise your storage thanks to the 2x SATA 3 and an M.2 SSD slot, and you can configure your RAM with the 2x DDR4 2133MHz SODIMM slots available. The motherboard features 3x USB 3.0 ports and a single USB 3.0 Type-C connector. 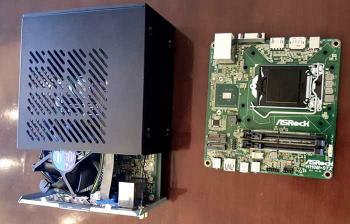 ASRock has developed its product further and built a barebone system around it called the ASRock H110M-STX MINI PC. This PC, pictured above left, measures 1.92 litres (155 x 155 x 80mm). ASRock hasn't given any indications about pricing and availability. Intel had originally touted the 5x5 as being capable of "sub 1 litre system volume," so ASRock has nearly doubled that size.

Looking at the ECS H110SU-02, it is basically the same spec as the above described ASRock motherboard. I note that it lacks the VGA connector offered by ASRock and has one less SATA 3 port. However according to Maximum PC it is simply "an engineering sample" at this time. 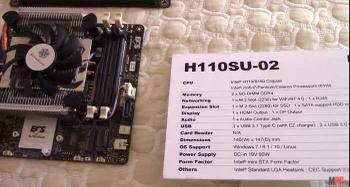 If you are interested in the Mini-STX form factor, there was another product at CES last week that might appeal. Silverstone was showing off a 'proof of concept' chassis, as highlighted by Tom's Hardware. However the chassis didn't even have a name yet, never mind price or availability date.

Posted by DanceswithUnix - Tue 12 Jan 2016 12:50
The fact I can plug a PCIe card into an ITX board puts ITX in a different league. I have built small servers by adding a second network interface, and built small gaming rigs by adding a graphics card.

But then Intel are trying to convince us once again that we don't need graphics cards: http://www.fudzilla.com/news/graphics/39640-intel-claims-most-don-t-need-a-gpu

DanceswithUnix
… I take it these won't fit in a uATX case if the situation arises either as the standoff holes will be wrong.

mITX already uses the smallest possible subset of mATX mounting holes, so any board smaller than that must use incompatible stand-off positions.

OTOH, the board is about the same size as the old nano-itx boards that Via built; but the stand-off hole positions are different from that, too….
Posted by DanceswithUnix - Tue 12 Jan 2016 14:08

scaryjim
mITX already uses the smallest possible subset of mATX mounting holes, so any board smaller than that must use incompatible stand-off positions.

OTOH, the board is about the same size as the old nano-itx boards that Via built; but the stand-off hole positions are different from that, too….

Pretty much what I was thinking.

Wake me up when they make something compatible with my Raspberry Pi case.
Posted by EndlessWaves - Tue 12 Jan 2016 14:53

DanceswithUnix
So I don't get it. If I don't care about expansion, I probably won't care about whether my CPU is soldered down as well which would lower cost.

Do you care about having a case you like the look of? Because right now there's no guarantee that the nicest case is available with the components you want. A motherboard standard like this allows you to pick case, connectivity and processing power separately.

Although much like it's Thin-ITX predecessor these appear to be designed for untidy external power bricks instead of a neat internal power supply. Although I couldn't find the specification document to check what it actually makes provision fro.