Microsoft's DirectX 12 is available to the majority of PC gamers, as Windows 10 has become the dominant platform according to a recent Steam Hardware and Software Survey. The API contains various features designed to help users get more out of their modern hardware – however one of the more highly anticipated features, Explicit Multi Adaptor (EMA) support, is rather difficult for developers to implement. Thus the kind of multi-GPU support seen in Ashes of the Singularity is an exception in modern DX12 gaming, rather than the rule. 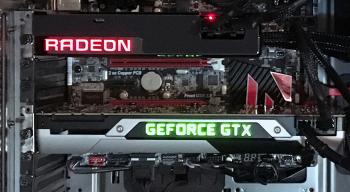 To recap, EMA offers the promise of multi-GPU scaling (like SLI or Crossfire), not just with identical GPUs but with mixed model and mixed brand GPUs. This comes in addition to other DX12 enhancements such as a "20 per cent improvement in GPU performance", more efficient CPU resource usage resulting in "up to 50 per cent improvement in overall CPU usage", and a vast increase in the draw calls the API can handle compared with DX11 – great for highly complex scenes.

So how can Microsoft get more games developers to implement EMA? Well, it seems to have tracked sideways to provide an easy way to implement 'basic multi-GPU support' rather than needing developers to get their hands dirty with the low-level EMA coding.

A discussion on GitHub referencing a PCper report talks about the new easier Multi GPU abstraction layer coming to DX12. "Microsoft's Chas Boyd was on-hand at AMD's editor's day for Polaris and previewed ideas that MS is implementing to help improve multi-GPU scaling. The best news surrounded a new abstraction layer for game developers to utilize for multiple GPU support that MS would be releasing on GitHub very shortly. According to Microsoft, with only 'very little' code adjustment, DX12 titles should be able to implement basic multi-GPU support."

This initiative could be good for developers, making it much easier to use multiple-GPUs in a PC system, and end users get the obvious benefit of making the most of their installed hardware. It would be particularly neat if Microsoft's DX12 can make some use of Intel GPUs, that otherwise lay dormant in systems with a discrete graphics card.

The earliest we expect to see a DirectX 12 update to implement the new feature is with the Windows 10 Anniversary Update in about a month's time.

QuorTek
Wonder how that would impact… would not mind having a cheap AMD card alongside with a Nvidia card, if there is any positive gain to this.

I don't know if this has any impact on how nicely the vendor drivers play with each other - ie MS might say you can have both cards in the same system, but nVidia will probably still detect the AMD drivers and disable their own as a result as they do currently.
Posted by scaryjim - Wed 06 Jul 2016 15:43
I think the more interesting question is how intelligently it is able to use GPUs of different performance, and whether it will be able to leverage Intel/AMD IGPs for compute and/or graphics rendering, or whether the additional overheads will make such combinations pointless.

Now it will be available for DX12 and Vulcan, so nVidia will have to think over its way

Now it will be available for DX12 and Vulcan, so nVidia will have to think over its way

I hope this will happen and succeeds, so my old GF670 will work as a support for a new card.

It's not for Vulkan.