Intel has launched two new SSD series for enterprise. The new Intel SSD D7-P5500 and Intel SSD D7-P5600 Series are claimed to be the ideal choice for I/O-intensive requirements across a wide range of workloads. The new SSDs, which will be made available in the U.2 15mm form factor only, have a number of headlining qualities in common which are; the utilisation of Intel 3D NAND 96-layer TLC technology, plus an all-new Intel PCIe Gen4 controller and firmware. 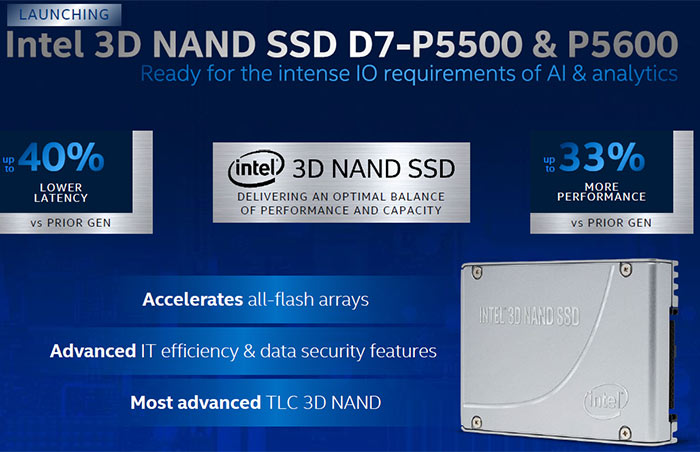 There are some significant performance uplifts claimed for the Intel SSD D7-P5500 and Intel SSD D7-P5600 series compared to the previous gen Intel SSDs. For example, Intel says that the "capacity-optimised D7-P5500 delivers up to 2x sequential performance and the performance-optimised D7-P5600 brings up to 44 per cent higher random mixed-workload performance," than the Intel SSD DC P4610, which used 64-layer TLC Intel 3D NAND technology and a PCIe 3.1 x4, NVMe 1.2 interface. Additionally, Intel asserts that "both drives also offer improvements to tail latencies, including up to 80 per cent lower 4KB Random Read Quality of Service (QoS) for 99.99999 per cent of transactions".

As well as tip-top performance, enterprise users keep a very close eye on metrics such as efficiency and data security. Intel claims to have these concerns covered with numerous firmware enhancements plus the following key features:

Key specifications of the Intel SSD D7-P5500 and SSD D7-P5600 Series are tabulated below. As you can see, these SSDs are available in a wide range of capacities ranging up to 7.68TB.

Another announcement from Intel today is that it has introduced Optane Persistent Memory 200 Series. Key claims are that these DIMM format devices deliver an average 25 per cent greater performance than their predecessors. The uplifted performance will help reduce I/O bottlenecks and boost application performance, especially with apps that rely on heavy I/O, like big-data analytics. 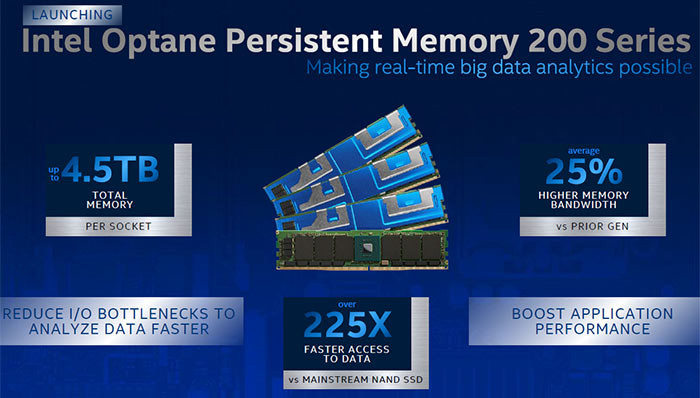 Four-socket systems utilising the new 3rd Gen Intel Xeon Scalable processors can pack up to 18TB of data into these Optane DIMMs, for speedy in-memory processing, and very fast resume after power loss.

“The presentation also revealed Intel is planning to launch Ice Lake-SP Xeon processors with up to 38 cores and 76 threads (per socket), with a TDP of 270 watts. These chips will feature support for 64 PCI Express 4.0 lanes, 8-channel DDR4-3200 memory (16 DIMMs per socket), and Intel's second generation Optane DC Persistent Memory.”
Copyright © 1998 - 2023, HEXUS.net. All rights reserved. HEXUS® is a registered trademark of HEXUS.