Samsung has launched its second gen quad-level cell (QLC) SATA SSDs for consumers. It trumpets the drives as offering "an uncompromising mix of speed, storage capacity and reliability for mainstream and professional PC users," but probably the biggest news is that the range offers capacities up to 8TB.

The new Samsung 870 QVO SATA SSDs have been able to double the max capacity of the range by utilising Samsung's latest V-NAND 4-bit MLC (QLC) flash chips. Furthermore, Samsung claims that these devices are both faster and more reliable than the previous gen. 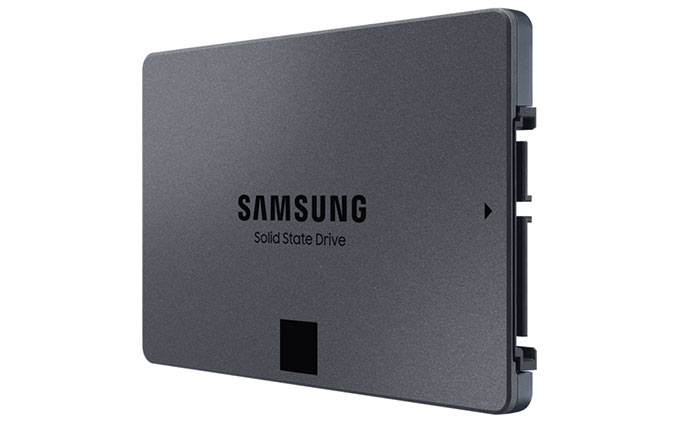 Enhancing the SSD performance as standard throughout the new 870 QVO range is both a DRAM cache, a large variable SLC buffer, Samsung's latest controller, and its Intelligent TurboWrite technology. Key performance metrics claimed for the new range are that they are offer sequential read and write speeds of up to 560 MB/s and 530 MB/s respectively, and up to 13 per cent faster random writes than with the previous gen 860 QVO drives.

Corresponding to its reliability claims, Samsung claims an endurance rating of up to 2,880 terabytes written (TBW) as part of its warranty, which if that milestone isn't reached will last a full three years. 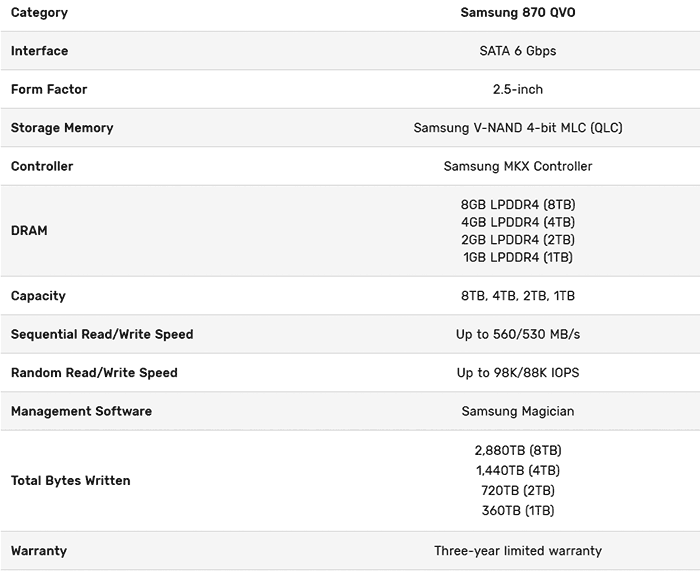 Some sites have had Samsung 870 QVO SATA SSDs in for review already. Anandtech, for example, sums up that it doesn't recommend the lower capacity versions as consumers can get TLC drives for less. If you have spare PCIe M.2 slots those would offer a preferable storage expansion option too. However, the larger capacity models currently have less competition in the targeted market.

These will be PMR and SMR drives. HAMR tech will remain business only for now.

Dev blog says features work with Windows 10 but that Windows 11 is more optimised.

And the 64GB eMMC version can be upgraded to an M.2 NVME SSD too.

3dcandy
I can't imagine why anybody would not have an m.2 nvme drive these days. I picked up a 1tb nvme drive for a client last week at £130 and it manages 3500 MB/s easily

Upgrades is the main reason, new machines I have been building with NVMe drives. Even the really cheap ones, the 250GB drives are only £50.

3dcandy
I can't imagine why anybody would not have an m.2 nvme drive these days. I picked up a 1tb nvme drive for a client last week at £130 and it manages 3500 MB/s easily

When I build my next work pc (end of yearish depending on prices) my current plan is 3x m2 nvme (os, scratch and active projects) and then 2-3 of sata ssd's ('fast' storage) and maybe 2 hard drives (long term ‘archival’ type storage like texture maps etc). Now I might be a little bit outside the normal user but there's still use case scenarios for sata ssd's.

Now don't get me wrong I'm not going to spend the prices samsung are looking at for those large ssd's (I really feel ssd prices are being manipulated to stay high at the moment) but I would still like to go ‘fully’ ssd this time.
Posted by 3dcandy - Thu 02 Jul 2020 08:22

DanceswithUnix
Upgrades is the main reason, new machines I have been building with NVMe drives. Even the really cheap ones, the 250GB drives are only £50.

But most machines in the house here don't have an M.2 slot of any kind. Give it a couple of years and they will be retired.

I must be unique then as every pc in here has at least one m.2 slot now apart from missus' old laptop she refuses to upgrade