LaCie has expanded its range of simplified network-attached storage (NAS) solutions with the launch of the Network Space MAX. 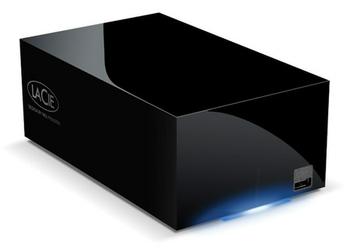 Available in 2TB (2x1TB) or 4TB (2x2TB) capacities, the unit features a choice of USB 2.0 or Gigabit Ethernet interfaces and is designed to offer secure, centralised storage and easy-to-use sharing functions.

Launched as an alternative to last year's Network Space 2, the Network Space MAX differentiates itself by sporting a duo of internal hard drives that support RAID modes 0 and 1 - the latter of which mirrors data across the two disks to provide added security.

In keeping with last year's model, the higher-capacity unit ships with Network Assistant software that promises to have you up and running within minutes, a built-in media server for streaming to any UPnP/DLNA-compliant device, and a remote access feature.

It's Apple Time Machine compatible, too, but it looks as though the Neil Poulton design is going to attract plenty of dust and fingerprints.