Ordered a new MacBook Pro in the hope that Intel's Thunderbolt will serve all your high-speed data transfer needs?

The bad news is that there are no Thunderbolt-equipped peripherals currently available. The good news? Supporting devices are on the way from the likes of Western Digital, Promise and LaCie, with the latter already teasing one of its first efforts; the Little Big Disk with Thunderbolt. 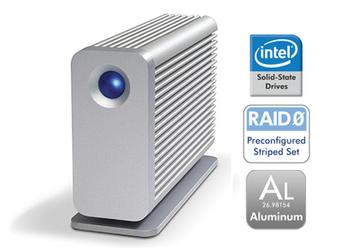 The slim external drive, pictured above, is armed with two yet-to-be-announced Intel 510 Series Solid-State Drives in a RAID 0 configuration, and of course two Thunderbolt connectors at the rear.

LaCie isn't quoting speeds at this point, but earlier prototypes have been known to exceed 700MB/s while daisy-chained between a computer and monitor. And daisy-chaining is exactly why the Little Big Disk features two Thunderbolt ports - they allow additional peripherals to be attached without a loss of performance. Providing a real-world usage scenario as an example, LaCie says "consider a video project that must be delivered to multiple sites". With a couple of Little Big Disks connected to a bi-directional 10Gbps Thunderbolt chain, "original HD camera footage can be quickly copied in the field to multiple drives on the same daisy chain."

Ensuring the 0.7kg Little Big Disk lives up to its "in-the-field" billing, the entire unit is bus powered through a Thunderbolt port, so there's no need to carry a power cable, and it's encased in a solid aluminium chassis.

We can see why the media sorts (digital content creators, video editors etc) would be all over this, but as yet there's no firm indication of pricing or availability. All we know is that the Little Big Disk with Thunderbolt should arrive sometime in the summer.

watercooled
It's not going to happen with HDDs, they will be the bottleneck don't forget. That's probably the peak speed from buffer-buffer.

But the speed should be near enough the same as an internal drive anyway.

These are SSDs in RAID0 configuration.
Posted by watercooled - Fri 25 Feb 2011 16:16
Yeah but who would use SSDs in one? You'd need to match or exceed the throughput with your internal drives for it to be worth while.
I know I'm just being pedantic but it annoys me when companies use stuff like that as selling points, some people will listen and think they'll get that speed with a single 80GB HDD or something in it.
Posted by Barakka - Fri 25 Feb 2011 17:00

watercooled
Yeah but who would use SSDs in one? You'd need to match or exceed the throughput with your internal drives for it to be worth while.

Not necessarily, I mean aside from the fact that the only machines cable of connecting to it are MBPs which can all be had with SSD system drives, it's more about the application.

A lot of this ThunderBolt stuff will be targeting the Sound and Vision industries where external drive speed is essential. As it stands now it's the external storage drive in which the speed counts, more than the system drive as that's where you're writing the data to. Writing upwards of 10 channels of 48k/24bit BWAV takes some serious bandwidth to the drives and is one of the potential bottlenecks especially when you start thinking how many channels you can fit with a 10Gbps pipe to the interface.
Copyright © 1998 - 2022, HEXUS.net. All rights reserved. HEXUS® is a registered trademark of HEXUS.