LaCie has announced what it claims to be the first implementation of hybrid storage technology, in the form of its CloudBox, which combines local backups with cloud storage.

The CloudBox has a 100GB capacity, the whole of which is backed up online. What's more, the backed up files are encrypted (with 128-bit AES) keeping them secure from prying eyes - including LaCie's. OF course it's perfectly possible to encrypt files on other inline backup services, but the CloudBox does it in the background, saving the effort.

The CloudBox comes with one year of free online storage, after which a subscription is required. The pricing for this isn't available yet, and as LaCie has a year before anyone will need to worry about signing up it's possible is won't be for a while, so it's unclear how expensive this backup option is versus rival services. However, with the CloudBox it's worth considering that even if not subscribed to the 'cloud' part of the package, it still serves as a local backup drive.

It's also worth considering that LaCie stores 'up to' 10 versions of each file backed up to the CloudBox, so not only is it possible to restore accidentally deleted or lost files, it's possible to roll back to an earlier version if needed. Plus, as a small consideration, the online backup can be transferred to a new CloudBox should one be required - in the event of its failure, or even theft, for example.

At £179.99 the CloudBox doesn't offer a great deal of capacity, but it does fill a niche for those more concerned that a local backup just isn't sufficient. 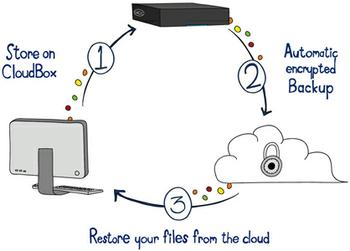 At £179.99 the CloudBox doesn't offer a great deal of capacity, but it does fill a niche for those more concerned that a local backup just isn't sufficient.

At £180 for 100GB, it isn't exactly stunning value for money either, unless you put a large value on the offline element,and even then, the offline element is for one year (as the article points out) with an additional subscription … which, after about 10 minutes of looking, I still can't find specified anywhere. It could be £10/year …. or £150/year. Or anything else. The amount maybe there, but it sure doesn't seem to be obvious.

Finally, a quick scan thorugh their T&Cs reveals an item that kills ANY chance whatever of me being interested in this service. Sorry about the capitals, but (presumably for emphasis) that's how Lacie formatted it ….

CUSTOMER SHALL INDEMNIFY, DEFEND, AND HOLD HARMLESS LACIE AND ITS EMPLOYEES, AFFILIATES, CONTRACTORS, AND AGENTS FROM AND AGAINST ANY AND ALL CLAIMS, DAMAGES, LOSSES, LIABILITIES, SUITS, ACTIONS, DEMANDS, PROCEEDINGS (WHETHER LEGAL OR ADMINISTRATIVE), AND EXPENSES (INCLUDING, WITHOUT LIMITATION, REASONABLE ATTORNEYS’ FEES) ARISING FROM OR RELATED TO (A) ANY BREACH OF THIS AGREEMENT BY CUSTOMER; (B) ANY USE OF THE SERVICE BY CUSTOMER; OR (C) ANY CLAIMS FOR INFRINGEMENT OF ANY THIRD PARTY RIGHTS ARISING FROM OR RELATED TO CUSTOMER’S DATA.

Now, that may be standard legal jargon generally ignored by most people, but think about what it says, especially in relation to that bit in (C) at the end. If a third party merely claims infringement, you have agreed to underwrite all Lacie's reasonable legal fees, without limitation to defend against that claim.

So suppose a major record company or movie studio claims you've copied a CD or movie, and that it ended up backed up on Lacie's “cloud” storage, 'cos you had it on your Cloudbox. If the record/movie company sues Lacie, YOU are liable for their legal fees, etc.

I am NOT putting my house and everything I have on the line over that kind of contract term, however unlikely it may be. And note, you don't actually even have to have copied the CD or movie, there just has to be a claim that you did, by a third party.

In my opinion, anyone that accepts that contract with that clause, however unlikely it might seem, is accepting a whopping great potential liability that could very easily bankrupt most people and cost them their home, and for what? Could backup?

That means that, in my opinion, anyone agreeing to this is a complete idiot. A moron of the first order. I cannot see how any data, any at all, is worth taking a risk of that magnitude, however marginal the risk might be. I refused to sign a contract for a substantial amount of work because of a clause like that, risking many thousands of lost income. I'm sure not signing it over 100GB of cloud backup.
Posted by antec74 - Sat 25 Jun 2011 19:16
i wouldn`t trust lacie to store a bottle of water!
they are veru un reliable i have had 4 drives all now useless!:censored:
Copyright © 1998 - 2022, HEXUS.net. All rights reserved. HEXUS® is a registered trademark of HEXUS.