Microsoft has announced the Surface Pro tablet will be available “by the end of May” in 19 new territories, which include the UK. Five further territories will have to wait until June to get their hands on the Windows 8 Pro powered tablet, so we aren’t the last... Currently only people in the US, Canada and China can buy it.

Australia, Austria, Belgium, Denmark, Finland, France, Germany, Hong Kong, Ireland, Italy, Luxembourg, New Zealand, the Netherlands, Norway, Portugal, Spain, Sweden, Switzerland, and the United Kingdom are all going to get Surface Pro availability by the end of May. Korea, Malaysia, Russia, Singapore, and Thailand will have to wait until June for availability of Microsoft’s flagship tablet. 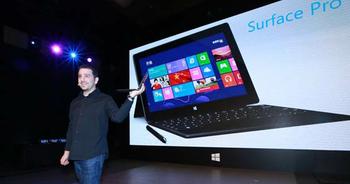 Brian Hall, general manager for Microsoft Surface, wrote on the official Surface blog that “enthusiasm for Surface has been fantastic”. This has translated into the firm suffering supply shortages of the 128GB version of the Surface Pro “one of our biggest challenges has been keeping our 128GB Surface Pro in stock. We’ve worked hard to increase availability, and most retail partners in the U.S. and Canada as well as the Microsoft Store now have the 128 GB product consistently in stock,” he said.

In January we learned that the Surface Pro 64GB version was pretty tight on available free space, even when “box fresh” so it isn’t surprising to hear the 128GB version is favoured by those paying $$$s for one of these devices.

Last month we learned that Microsoft had only sold a combined total of 1.5 million Surface tablets. This figure was made up of just over a million Surface RT tablets and 400k Surface Pro tablets. Also some Windows RT device makers, such as Samsung, were withdrawing plans to sell such devices and looking at the putting more resources into Google Chromebooks. However recent research by Net Applications indicates that isn’t a better strategy.

More precise launch dates and pricing will be revealed country by country, as the time grows closer. Are any readers eagerly waiting for the Surface Pro to be launched here?

63 QOTW: Have you ever bought a pre-built desktop?

Or do you always build your own?

Meanwhile, a leaker shows off what is claimed to be a DG2-series graphics card.

raven1001
Marketing BS, it aint selling well at all, that's why it's consistently in stock. You don't fool me MS.

Well they did sell out at first, and they have sold over 1M in the first 6 weeks of launch. The question is, did they expect to sell more.

Not really, because if you've got an iPad, you're still going to need a computer. With this, you won't need an iPad with your computer.

But for me, its too much of a sledgehammer for my walnut tasks. I want more battery life than it offers, also built in 4g. As such its a definate no, maybe the refreshed version, but not this one.
Posted by jas88 - Wed 24 Apr 2013 15:58
Short version seems to be ‘nice enough little laptop, but eyewatering price for the spec’?

I'd have liked a Surface RT, if the software wasn't so restricted (put a proper ARM port on there, MS would have a sale!) - I've always liked ARMs. Maybe hacking a Chromebook's the way to go…