Qualcomm has launched the Snapdragon 690 SoC, with which it aims to help spread 5G compatibility for smartphones further, and firmly into the mid-range market. Previously you would have needed to buy a higher-end device packing a modern Snapdragon 800 or 700 series processor to get 5G via a Qualcomm chipset. That's not all though; the SD690 delivers worthwhile boosts to CPU, GPU, and ISP, as well as offering "remarkable on-device-AI," according to Qualcomm. 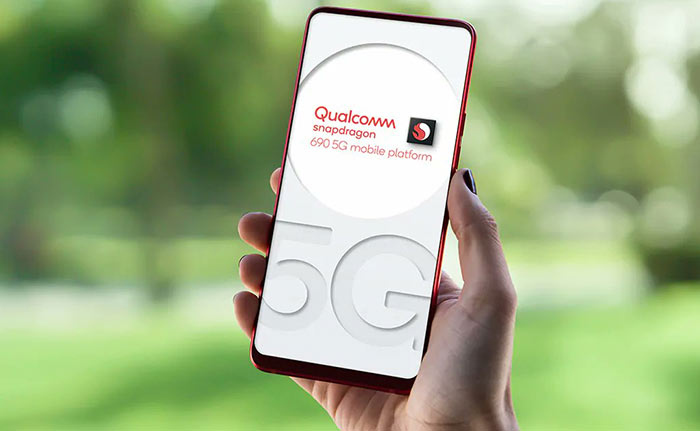 The SD690 is a global 5G platform, so it should be compatible with 5G networks wherever you may travel. The SoC utilises the Snapdragon X51 5G Modem-RF System, to be specific, with 100MHz 4x4 MIMO tech to deliver up to 2.5Gbps download speeds (and can fall back to support up to 1.2Gbps on 4G LTE).

As mentioned this latest Snapdragon 6000 series chip doesn't only bring 5G to the series for the first time, it has other significant upgrades which will enhance the end user experience. First of all, we can consider the CPU component, which is said to be 20 per cent faster than its top of the 600 series predecessor (the SD675). In the SD690 Qualcomm uses its 8nm Kryo 560 CPU, which is based upon 2x Arm Cortex A77 cores (big), and 6x A55 cores (LITTLE).

Moving onto the GPU and the SD690 includes the Adreno 619L. This component delivers an even greater uplift, said to be 60 per cent faster than its predecessor. Devices sporting the SD690 will support FHD+ displays rendering graphics at up to 120Hz. Qualcomm says the GPU is great for entertainment too, in concert with the 5G connectivity, enabling flawless 4K HDR video streaming.

Photographers and videographers might find the new Qualcomm Spectra 355L ISP appeals. Again, in a first for the 600 series, it allows for capture of 4K HDR video in over a billion colours. 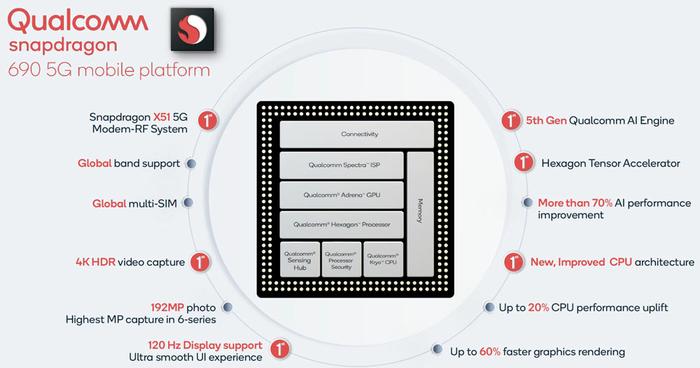 On device AI is handled by the 5th gen Qualcomm Artificial Intelligence (AI) Engine and Qualcomm Hexagon Tensor Accelerator (HTA). In comparison to the previous gen AI performance this is claimed to be 70 per cent faster.

Other aspects of this SoC worth mentioning are that; it enables Fingerprint, Iris, Voice, and Face biometrics, it supports Quick Charge 4+ tech, it features the Qualcomm Aqstic audio codec, and it supports up to 8GB of 1866MHz LPDDR4x RAM.

According to Qualcomm the first SD690 5G devices will start to appear later this year. Expect new devices packing this SoC to be announced by the likes of HMD Global (Nokia), LG Electronics, Motorola, Sharp, TCL, and Wingtech to be announced in the coming months.

We promised we’d scale #5G and get it into the hands of more people than ever - today, we’re making good on that promise. Very proud to announce the first 5G platform in our 6-series: the #Snapdragon 690 5G Mobile Platform. It’s unlocking 5G for everyone.https://t.co/FvHn1LoLpJ pic.twitter.com/Crq0u5cQa8

Don't be like Bagpuss, who purchased a Samsung A90 5G phone in November 2019, on the promise that 5G would be available in his town in just a month or so, only for Three to go back on their word and delay the rollout, quickly followed by a Pandemic, halting any possibility of any further rollout until God knows when.

Don't be like Bagpuss, who purchased a Samsung A90 5G phone in November 2019, on the promise that 5G would be available in his town in just a month or so, only for Three to go back on their word and delay the rollout, quickly followed by a Pandemic, halting any possibility of any further rollout until God knows when.

Yes, indeed, when it comes to mythical 5G, Don't be like Bagpuss.

I'm doing the opposite. My S8 will last until 5G is in my city or actively being deployed.

My S8 is feeling worse for wear. I dropped it (again) and finally cracked the screen. Given how many times it has gone a flying, that's not bad going. I popped some superglue in the cracks and it has stopped them spreading out and you now hardly notice it during use.

I won't be replacing it unless I absolutely have to. I'm not spending any money on a 4G phone and I'm not buying a 5G phone until the tech is available for use. I might as well let it mature, let the price drop further and let the coronavirus fester in all those using 5G and get cooked by Bill Gates' RFID chips! HAHAHAHAHAAAAaaaaaaaa