Microsoft published its FY21 Q4 earnings yesterday evening. Overall, the results were very good – who can deny a revenue increase of 21 per cent and profit increase of 47 per cent is anything but excellent? However, while the results from some of Microsoft's businesses were stellar, others held the firm back from even better results.

Microsoft's shares dived initially in after-hours trading, but they rebounded a couple of hours later, after analysts had had enough time to pick through the releases, and an investor conference call mentioning expectations of double-digit revenue growth had been completed. 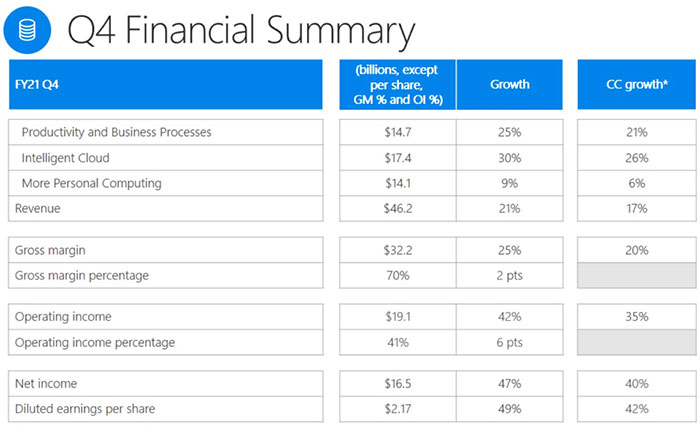 There are three business segments in Microsoft's business; Productivity and Business Processes, Intelligent Cloud, and More Personal Computing. All of these saw growth, but the part of the business that touches HEXUS readers the most, More Personal Computing (consisting of Windows, Gaming, Devices, and Search advertising) was the weakest performer by far in the most recent quarter.

The best performing sub-segment for Microsoft in More Personal Computing was its Search advertising business. Revenue from these ads grew 53 per cent in the most recent quarter. A significant part of this uplift was driven by LinkedIn's advertising business, which is said to have surpassed $1 billion in revenue (for a quarter) for the first time – this is 97 per cent up YoY.

Both Windows and Surface businesses were impacted badly due to "ongoing constraints in the supply chain," explained Microsoft in a post-earnings conference call. A bright spot for Windows was with commercial products and cloud, driven by demand for Microsoft 365. Obviously, Microsoft wants to grow this with Windows 365 in the not too distant future.

Surface results appear to be exceptionally bad, but Microsoft says that the previous year was particularly strong, so it creates a tough comparison. Gaming didn't live up to its potential either, though there is a definite appetite for Microsoft's current gen consoles, its manufacturing partners just can't meet the demand at this time.

In other Microsoft news, Microsoft Flight Simulator has launched on Xbox Series X and S using the power of Azure, Bing Maps, and Xbox Game Pass. The new PC performance patch has also gone live, promising fps improvements of up to 50 per cent.

Posted by KultiVator - Wed 28 Jul 2021 15:02
Is there any clarity on whether these figures are impacted by Microsoft's huge spending spree on games studios (e.g. Bethesda and their Parent Group)?
Posted by philehidiot - Wed 28 Jul 2021 16:28
Windows not declining is it doing well. They have a huge share of the market and not losing customers is an achievement. Also, Windows fuels their other segments due to the massive brand awareness. Single digit growth is good in this area.
Posted by 3dcandy - Wed 28 Jul 2021 17:23

philehidiot
Windows not declining is it doing well. They have a huge share of the market and not losing customers is an achievement. Also, Windows fuels their other segments due to the massive brand awareness. Single digit growth is good in this area.

3dcandy
As I said in the Win 11 thread. Win 11 isn't the biggest focus. Get an upgrade to Win 11 but they really want you to get Office365 and the other stuff

philehidiot
They can have two fingers? Maybe a fart in their general direction?

But your mother smells of elderflower!