Microsoft’s CEO Steve Ballmer took part in an interview with The Seattle Times, published this weekend. In a wide ranging discussion he talks about how 2012 will be “the most epic year in Microsoft history”, Surface pricing, competing with the iPad, competing for talent against Google & Facebook, being a small player in a big market with Windows Phone and the long term future of the company.

Mr Ballmer thinks the launch of Windows 8 will have an impact upon Microsoft and the world of computing of similar magnitude to the launch of Windows 95. It’s not just the desktop Windows OS being updated this time. “Almost every major product and service is launching a new version or an update this year”. Mr Ballmer says this is a “deliberate coincidence”, following new principles in design and usability. Addressing the naysayers, he says that “Windows 8 is going to do great. I don't have any (doubts). It's a fantastic product.” 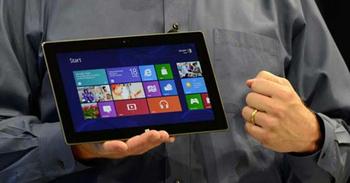 iPad and the 7-inch dwarfs

When asked about the iPad, and how the interviewer sees it’s only weakness as being too pricey, Mr Ballmer responds “We haven't announced pricing. I think we have a very competitive product from the features perspective. ... (When) people offer cheaper, they do less. They look less good, they're chintzier, and they’re cheaper.” He turned his attention to the Kindle and Nexus 7; “If you say... would somebody ever use a Kindle (Kindle Fire, $199) to do their homework? The answer is no; you never would. It's just not a good enough product. It doesn't mean you might not read a book on it...” Finally suggesting a very wide price bracket, but as you know the Microsoft Surface is available in ARM and Intel flavours “If you look at the bulk of the PC market, it would run between, say, probably $300 to about $700 or $800. That's the sweet spot.”

Why isn’t Microsoft seen as innovative or cool? 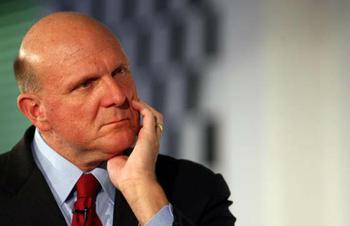 The newspaper interviewer thinks that Google and Facebook are more attractive employers for “young, top talent”. Steve Ballmer dismisses these assertions, except for a concession that Facebook still has a little bit of start-up charm left, since it’s only recently gone through its IPO.

Mr Ballmer admits that, with the impending launch of Windows Phone 8, “We've got a big challenge in front of us. We're a very small player, but we have a different point of view in terms of user experience. We've got great cloud integration with the rest of the Microsoft world, which a lot of people participate in. So I think our point of view on user interface, the great work that our hardware vendors are doing and the integration with Windows should help ratchet us up.” At the interview Mr Ballmer had a pair of Nokia Lumia 920s in his pockets...

The future of Microsoft is devices and services

In five or ten years Mr Ballmer sees Microsoft more of a “devices and services” company than just a software company. He then made it clear that this “Doesn't mean we have to make every device. I don't want you to leap to that conclusion. We'll have partners who make devices with our software in it and our services built in”. (Does that re-assure the Acer CEO?) From that it sounds like there will be several more Microsoft branded computing devices coming up to accompany the Xbox and Surface.

I see how they failed to grasp that completely.
Posted by Biscuit - Mon 17 Sep 2012 22:07
microsoft have given people too long to think. Google went in so cheap people just impulse bought, apple do it by hiding the product till the last minute… Microsoft dont seem to be doing either.

They seem to have this PMI thing going on where, ‘everything is going to be amazing’ what they fail to see is that, it actually has to be more than words for them.
Posted by TheAnimus - Mon 17 Sep 2012 23:08
In fairness, I can't see a single reason to buy an iPad format over theirs.

Its just I can't see a reason not to spend the extra £500 and buy a fricken ultrabook.

I mean tablets are just for toddlers / hipsters.
(I own an iPad2, Nexus7, Kindle Fire and a windows 8 ‘device’).
Posted by Biscuit - Mon 17 Sep 2012 23:17
i actually find my tablet very useful when im travelling light, its replaced by already portable netbook. I also find it very useful for work, rather than lugginag around big A1 system schematics i can just use my tablet with autocad WS. Evernote with skitch is also extremely useful for a huge number of purpses. Perhaps im a hipster :p