You are here:
Wii Features

Nintendo has unveiled Mario Sports Mix, a collection of four high-energy arcade style sport games; Basketball, Volleyball, Hockey and Dodgeball, with some unexpected twists and turns along the way.

Due to launch across Europe on 28th January 2011, you get to play as famous Nintendo characters or challenge your own personalised Mii character to a match against of the likes of Mario, Peach, Yoshi or Toad. However, choose your stage carefully as it will affect gameplay in challenging ways changing the way the ball and your surroundings behave. During each game you will also find items that will scupper the opposition and coins that increase your score, so that the final result is never certain until the very end. For example allowing you to slip up your opponents with banana peel or shoot a green shell to stun another player for a couple of seconds so that they lose possession of the ball. Each character in the game also has a different special move, like filling the opponent’s side with flowers for Daisy or throwing a yellow “bomber shot” for Wario.

Mario Sports Mix can be played in single player mode or in up to four player matches in every sport where you compete for three different cups: Mushroom, Flower and Star Cup. Play as your chosen Nintendo characters and pit your skills against your opposition of 8 teams to become champion of each fast and furious sport, where additional stages and characters will be unlocked upon victory. 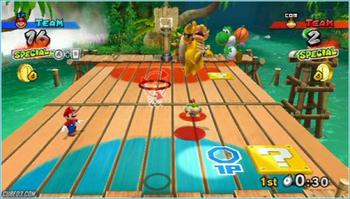 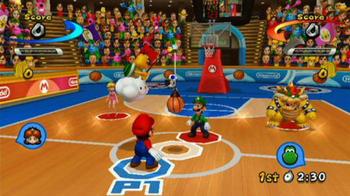 To ensure your experience will never be the same, when replaying a tournament, an alternative path may appear where you will be faced with special challenges or a mini game from the party mode to complete. Four different mini-games can be played, each inspired by a different sport. In the Basketball mini-game, Feed Petey you must grab low-hanging fruits from the ceiling and aim them directly into the mouth of Petey the piranha plant... In Smash Skate, you must push other players off a ledge using hockey sticks to perform charged shots and Bomb-omb Dodge requires you to dodge bombs that are shot by cannons at each corner of the Dodgeball court. In the final mini-game Harmony Hustle, different coloured volleyballs are thrown in line with the music onto the court - you must catch the one of your own colour and avoid a multitude of traps and balls to win combo points.