A new game based on the Alien(s) franchise is about to burst forth onto PCs and consoles. Aliens: Fireteam Elite is a co-op shooter, for teams of three, in which you will "relentlessly fight for survival" with the eventual hope of eradicating the Hive.

The above 'pre-order trailer' will probably give you enough info to pretty fully understand this offering, if you have ever watched any Aliens films. In contract with the Alien Isolation game which built upon the feeling of horror being trapped in space with an incredibly deadly foe, this game looks like it will be a guns-blazing style shooter through and through.

Your in-game success against the AI xenomorphs and Weyland-Yutani synthetics is likely to rely heavily on joining and making up a balanced team of Colonial Marines. To this end, 20th Century Games says players have "an extensive variety of classes, weapons, gear, and perks," to leverage in their fight for survival and eventual victory. Some time will be spent, therefore, creating and customizing your Marine and changing his/her loadouts, and so on when you get an opportunity for a breather. 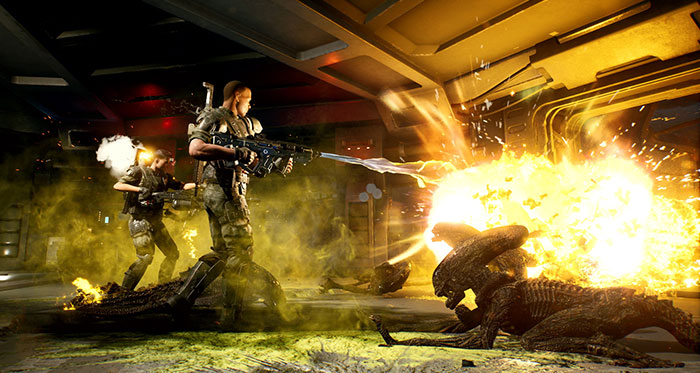 Aliens: Fireteam Elite will become available on PC (Steam), plus the Xbox One, Xbox Series X/S, PS4, and PS5 on 24th August. The developers are encouraging folk to pre-order their $40 title to get the 'Hardened Marine' bonus pack of skins, emotes etc. For $60 you can buy the Deluxe Edition and get some more cosmetics plus the promise of a number of upcoming DLC bundles.

Posted by Spud1 - Thu 24 Jun 2021 11:36
Waiting to see on this one….definitely not a pre order game. Fingers crossed it's fun to play and doesn't become another generic cover shooter…i fear it may, but the gameplay trailers imply it's pretty decent. I know this one is IGN but even so…

Looks like it may be fun, although the movement in that early release looks super janky that may just be as they are playing with controllers, it may work better with a KB/Mouse.
Posted by Vandella1985 - Thu 24 Jun 2021 15:44
if this is anywhere near as good/scary as resurrection, then ill happily pay to s**t myself!!
Posted by QuorTek - Thu 24 Jun 2021 16:45
Actually this might actually be a game I would like to buy and play with randoms or friends
Posted by Ttaskmaster - Thu 24 Jun 2021 19:28
Looks dull as dishwater.
The Aliens franchise has inspired so many subsequent films, programmes and video games that there's nothing left for an actual Aliens game to bring to the table. Isolation was really onto a good thing, but the whole bug-hunt idea was burnt out yonks ago… which is why so many of them insist on implementing ridiculous EU additions to the canon. Just more churn like the Marvel universe.
Posted by Nifl - Thu 24 Jun 2021 21:27
Yet another cover-co-op-shooter. Probably designed as a live service to milk the franchise to its maximum. I doubt it will be good.
Copyright © 1998 - 2023, HEXUS.net. All rights reserved. HEXUS® is a registered trademark of HEXUS.