Blizzard is rolling out a 'high-bandwidth update' for Overwatch on the PC. The update to Overwatch's netcode will have already reached most regions over the weekend. Overwatch lead engineer Tim Ford and senior engineer Philip Orwig have put together a video explaining the update and the ramifications it will have (video embedded below).

The main impact of the 'high-bandwidth update' for Overwatch will be an improvement in the experience for users with good quality internet connections. When Overwatch was released the number one priority for the netcode guys was stability – for a successful launch. Now the guys can work on optimising experiences where they can and that is what the 'high-bandwidth update' is all about.

If you are playing Overwatch "the server will dynamically figure out whether or not you’re syncing the packets appropriately, and downgrade you or upgrade you as necessary," explained Orwig. Those with better net connections will notice that their IND statistic (Interpolation Delay) which was usually 55-ish for a good connection, will now drop to about 20. Getting to the point of why this important, Ford said that "The net result of this is that you will be shot around corners less. You’ll be able to predict escape moves better, and the server will hear about it sooner." Ford added, "So, if you got that Blink off, the server is going to process that quicker, making you less likely to get hit by hooks." 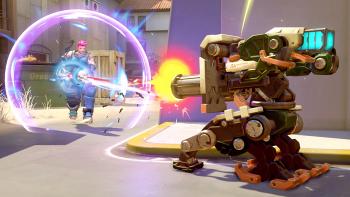 Whichever netcode mode you end up with, depending upon your server connection, the Overwatch code is still predictive but with the 'high-bandwidth update' and lower latency it is less likely to mispredict what is going on.

This update isn't available for console users yet. "We're still investigating how to roll this out to on console," said Orwig.

37 QOTW: What are your impressions of ray-traced graphics?

Posted by Corky34 - Mon 12 Sep 2016 11:10
So would players using the high-bandwidth netcode be matched with low-bandwidth?

That sounds like the old days of modem players being owned by ISDN players, could it also split the player base?
Posted by mtyson - Mon 12 Sep 2016 11:59

Corky34
So would players using the high-bandwidth netcode be matched with low-bandwidth?

That sounds like the old days of modem players being owned by ISDN players, could it also split the player base?

virtuo
So is it “high bandwidth” or “low latency” filtering?

I think they were using the terms to mean the same thing here. 90% of gamers probably wouldn't know the difference between the two :P I would guess it would be a quick ‘latency’ test to determine which server the user connects to i.e. a higher or lower ‘tick rate’.