You are here:
Software Features 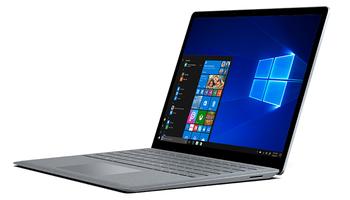 The beautiful Surface Laptop introduced at Microsoft's education event earlier this week has been hogging the limelight among the tech press, but you could argue that the most significant unveiling was that of Windows 10 S.

Described by the software giant as "streamlined for security and superior performance," the new Windows 10 S operating system works exclusively with apps from the Windows Store. Microsoft's FAQs go into greater detail, but in a nutshell Windows 10 S will not run third-party desktop applications. In order to unlock that benefit you'll need to pay to upgrade to Windows 10 Pro.

The app-store limitation shares plenty of commonality with rival operating systems such as Chrome OS and iOS, with Microsoft keen to point out that "Windows 10 S is ideal for people who have everything they need in the Windows Store and prefer the peace of mind that comes with removing the risk of downloading apps from other places."

But on the flip side, does the Windows Store offer everything you need? We're told that the full Microsoft Office suite will soon be available, but the Store lacks many popular programs, including the likes of Google Chrome and Apple iTunes, and there's no guarantee these services will become available anytime soon, if at all.

It's an interesting twist in the Windows 10 tale, so taking into account the apps and programs you currently rely on, let us ask: would you be comfortable using Windows 10 S? Share your thoughts using the comments facility below.

You will also need a DX12 GPU. Developer preview version arrives this summer.

It is currently rounding off a 'pre-IPO' fundraiser that values it at modest $7 billion.

Was trying to think if any windows device I owned (PC, Laptop, 2in1) could get by with it and I don't think I could. Just like the flexibility and option to have the things I want on it the way I want it.
Posted by EvilCycle - Fri 05 May 2017 16:52
No! It is promoting the use of locked down operating systems whereby you can only use software approved by the owner of said system and limits/hinders progression, it is all about control and I hate it.
Posted by beazermyst - Fri 05 May 2017 16:53
I owned a dell venue 8 pro for a few years, and owned it from the start. on small devices with celeron/atom processors UWP absolutly run faster. I would only use windows 10 s on a devices like this. The idea of running windows 10 S on the new surface laptop seems stupid. But then again for 50 bucks to upgrade to windows 10 pro isnt bad. This will be a threat to general macbook users, because if it is only UWP it will run fast and be very efficient. and with this running on normal processors instead of arm processors there are way more options. I believe that with windows build we will learn more about UWP containers being able to run android apps, and maybe (but not likely) ios apps. Also the idea of having 32bit apps running inside of the UWP container could be presented strongly. This is more than windows rt 2.0, it really does seem like chromebook os except with windows apps and upgrade paths. for the general user this really will work great. I'd buy a windows 10 s machine if it fit in my backback for school, but the price would have to be below 250. This makes way more sense as a productivity device than the ipad pro and I think it will sell well this august. But Microsoft can't afford to screw up their marketing on this one.
Posted by Ttaskmaster - Fri 05 May 2017 16:59

But on the flip side, does the Windows Store offer everything you need?

Steam, Origin, Uplay, VLC, WhatsApp, Skype… I could probably name a hundred common(ish) apps on mobile or desktop platforms that many people use but probably wouldn't find in the WinStore….

As a portable device, maybe. I owned a Surface RT for a year and it worked really well as a portable tablet device with office built in..at the time my work laptop was a beast so I would take the RT to client meetings etc and it was absolutely fine. You have office, Skype, Whatsapp, casual games, Tabbing/music/paint/photoshop apps etc…So maybe, if I couldn't afford a “proper” machine/OS.

As a desktop/home use machine? No, as I play a lot of games and as a result need the freedom to run games/steam and the like