Nvidia researchers have come up with a new Temporal Anti-Aliasing (TAA) method which adds adaptive ray tracing rendering techniques to the mix. The new Adaptive Temporal Anti-Aliasing (ATAA) is primarily an improvement as it adds less blur, and can remove ghosting artefacts from a scene which you might get with TAA. Furthermore, ATAA is fast enough to be implemented in games and was demonstrated by the researchers in Unreal Engine 4.

We introduce a pragmatic algorithm for real-time adaptive supersampling in games. It extends temporal antialiasing of rasterized images with adaptive ray tracing, and conforms to the constraints of a commercial game engine and today’s GPU ray tracing APIs. The algorithm removes blurring and ghosting artifacts associated with standard temporal antialiasing and achieves quality approaching 8× supersampling of geometry, shading, and materials while staying within the 33ms frame budget required of most games.

ATAA pragmatically builds upon the strengths of TAA. The new algorithm runs TAA on most pixels in a scene and then a segmentation mask is generated on common TAA failure areas which would result in blurring, jaggies, flicker or noise. Remember often TAA fails when new screen areas are disoccluded (revealed) by object motion, are not represented in the history buffer, or are misrepresented by the motion vectors. Camera rotation and backwards translation also create thick disocclusions at the edges of the screen when TAA goes wrong. 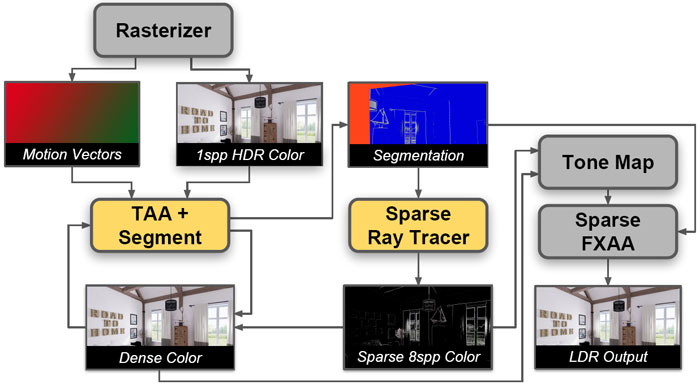 In addition to the regular TAA method, ATAA makes use of the segmentation mask to leverage FXAA (Fast Approximate Anti-Aliasing) on disoccluded pixels, and raytracing tech where there is a high chance of TAA failure (often at high contrast scene edges). In the image above you can see a scene where the new technique has divided a scene into TAA (blue), FXAA (red), and Ray Tracing (yellow) segments. Looking at a close-up of the yacht, below, you can see where ray tracing has come into play for improved natural definition.

The test system was powered by a $2,999 Nvidia Titan V graphics card. ATAA was operating at 18.4ms at 8x supersampling, 9.3ms at 4x supersampling, and 4.6ms at 2x supersampling for the sample image with a 1920x1080 pixel resolution.

The link provides a pre-print sample of the research paper which will be revealed in full at SIGGRAPH 2018, Vancouver, which runs from 12-16th August.

Posted by CAT-THE-FIFTH - Wed 01 Aug 2018 11:12
I suspect the next Nvidia cards will support ray tracing better! ;)
Posted by watercooled - Wed 01 Aug 2018 12:44
I wonder if, like you say, the hardware does it quite well allowing certain games to have it at needlessly high levels by default, killing performance on older and competitor cards? :rolleyes:
Copyright © 1998 - 2020, HEXUS.net. All rights reserved. HEXUS® is a registered trademark of HEXUS.