At this week's Game Developers Conference, Nvidia has surprised by demonstrating its GeForce RTX technologies running on an Arm-based platform. The goal is to show how Nvidia's advanced graphics tech can be extended to "a broader, more power-efficient set of devices," explains an email received by HEXUS. In brief, these demos are described as a "milestone" for the industry showing a modern AAA title like Wolfenstein: Youngblood flexing real-time raytracing and DLSS tech on a machine powered by a MediaTek Kompanio 1200 (Arm processor with 6nm design, and 1 Ultra / 3 Super / 4 Efficiency cores CPU config) and a GeForce RTX 3060 GPU.

In the video above, you can see someone playing Wolfenstein: Youngblood on the Arm-based PC put together by Nvidia developers. This gaming demo was built with the help of developers at MachineGames and Bethesda Softworks.

The video appears to show the game playing smoothly, but there isn't a frame counter on screen or any other stats provided for this gaming session. Nevertheless, it is claimed to show the power and flexibility of the idTech game engine, with RTX effects sprinkled liberally throughout. MachineGames CTO Jim Kjellin hints that the Arm CPU / Nvidia GPU combo is a taste of a future trend. However, Nvidia's video notes that the game is not going to be made commercially available for Arm platforms. 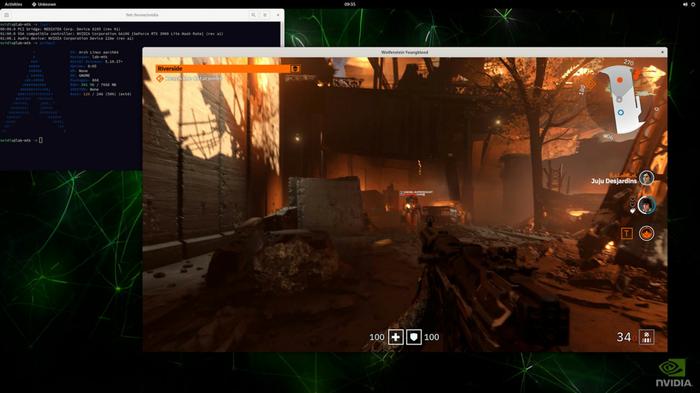 The second part of the video shows a demo of a sample framework scene called The Bistro. This cafe scene includes "more than 80,000 illuminated triangles all emitting at the same time, bathing the room in lamplight and sunlight," boasts Nvidia.

Together, the demos in the video showcase the following key Nvidia RTX technologies that are coming to Arm / Linux SDKs:

HEXUS has been told that the RTXDI, NRD and RTXMU SDKs for Arm with Linux and Chromium are available now. RTXGI and DLSS will be coming soon. There is some chitter-chatter on various news sites about upcoming Chromebooks featuring a MediaTek Kompanio 1200 SoC and GeForce RTX 3060 GPU pairing, but I think it is mere speculation at this time. 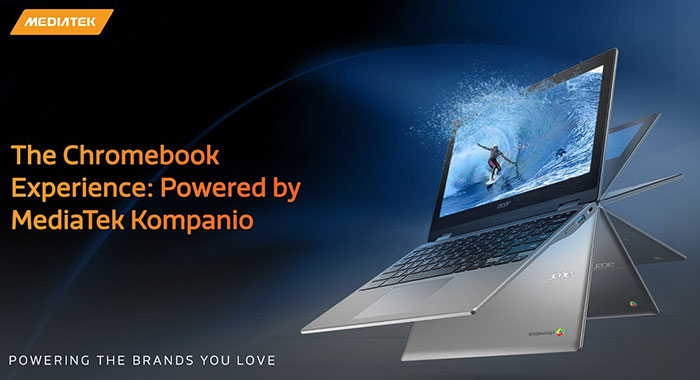 In other recent Nvidia news, the latest GeForce Game Ready driver was released on Monday, and it is ready for Windows 11, and supports DLSS 2 in Red Dead Redemption 2. Additionally, the driver will support DLSS-enhanced gaming in Chernobylite, which exits Early Access on 28th July. You can read all about the new driver and its various optimal settings and enhancements, plus newly validated G-Sync Compatible displays here.

Yoyoyo69
I did suspect this may be part of their gameplan, when the news initially broke.

Their Tegra line of SoCs have been running Nvidia graphics on Linux for years, so the hardware support doesn't seem such a jump. More the Id Software game engine really.
Posted by Yoyoyo69 - Wed 21 Jul 2021 10:21

DanceswithUnix
Their Tegra line of SoCs have been running Nvidia graphics on Linux for years, so the hardware support doesn't seem such a jump. More the Id Software game engine really.


But yeah, I almost posted as such, the Switch being the biggest success for this SoC. I meant more of them buying up ARM, them pushing their Nvidia GPU IP more
Posted by DanceswithUnix - Wed 21 Jul 2021 10:56


But yeah, I almost posted as such, the Switch being the biggest success for this SoC. I meant more of them buying up ARM, them pushing their Nvidia GPU IP more

They seemed pretty up front about pushing their graphics IP as an ARM option. I think I said at the time I would be worried if I was on the ARM GPU team at this buyout, though it could be argued that the ARM graphics was always a cheapish option so possibly still no real overlap. But two GPU teams at Nvidia makes little sense long term.

With the right drivers in place, Nvidia could offer all the parts to make supercomputers. They have Mellanox networking and the big GPUs, and if they are lining up for an assault on server business then showing their GPU drivers just work even with games is a win for some nice high end supercomputer deals.