In Early July, HEXUS reviewed the Asus ROG Strix G15 Advantage Edition, which is based around AMD's latest and greatest mobile CPU and GPU, working in combination. It was interesting to see the first mobile RDNA2 GPU we have had in our labs and compare it vs similarly specced laptops using various AMD/Intel CPUs and Nvidia Ampere GPUs. In our tests, you can see what the combination of an AMD Ryzen 9 5900HX and Radeon RX 6800M can achieve. Now a Chinese tech site has done a similar benchmarking comparison, concentrating quite narrowly on AMD's Radeon RX 6700M vs a similar system packing an Nvidia GeForce RTX 3070 Laptop GPU.

The review at Zhihu compares the following two laptops; the MSI Delta 15 (pictured above) with Radeon RX 6700M 110W GPU, and the Razer Blade 14 with GeForce RTX 3070 90W GPU. Please note that the reviewer isn't 100 per cent certain about these TDPs, he admits he doesn't know the AMD GPU TDP (80/110/130W is possible), and in official specs the Razer's Nvidia GPU is said to be 100W. Additionally, the MSI all-AMD device uses SmartShift technology to intelligently shift power between the CPU and GPU depending upon process demands, with the GPU peaking at 115W.

The most important slide from the Chinese review is above, showing a summary comparison in a number of popular games running at 1080p. We don't know the game settings, but assume they would have been the same on the pair of Ryzen 9 5900HX CPU packing systems. 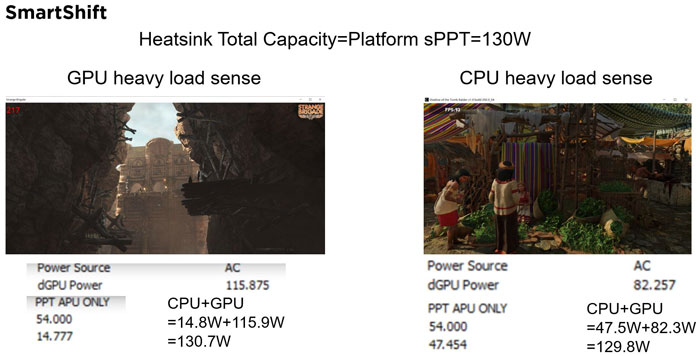 Averaging out the scores, it seems like the AMD GPU is nearly 10 per cent faster than the RTX 3070 in these tests. However, as VideoCardz says about the review, the deciding factor could be the greater wattage the AMD GPU is allowed to consume. Things will surely become clearer when more of these AMD RDNA2 GPU packing laptops get into the hands of professional reviewers. At least for now, we can see that the RNDA2 mobile GPUs are worthy challengers in this space, as long as you appreciate AMD's graphics features like FidelityFX, vs Nvidia's DLSS, Reflex, RTX, and so on.

I recently bought a new laptop and was really keen on an Asus Zepherus until I found out it ran the 3070 at sub 100w. I ended up with a Lenovo Legion 5 which puts the 3070 out around 130w which makes a substantial difference in fps if gaming is a need. The trade off is a huge power brick but not a problem for my needs/usage
Posted by darcotech - Mon 09 Aug 2021 16:26
But how many cores that mobile 3070 has? Isn't it something like desktop 3060? Or even less?