Blizzard launched Overwatch earlier today on PC, PlayStation 4 and Xbox One. By all indications this is going to be a very popular game; the Open Beta test broke records for Blizzard, so both AMD and Nvidia have rolled out drivers optimised to provide the best performance they can in the new game. As usual with driver updates, that's not all. Both sets of drivers provide optimisations and profiles for a few further games plus numerous resolved issues and bug fixes. 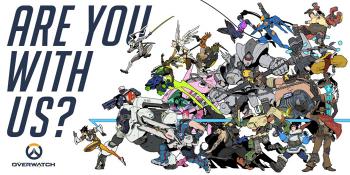 AMD's driver is flagged as a 'Hotfix' with the following highlights:

There are several notable issues fixed. What caught my eye were the fixing of stuttering in Fallout 4 when using a Crossfire setup. Similarly texture flickering was removed from The Division on Crossfire setups. It was good to see that AMD also ironed out a couple of stability issues with its XConnect external GPU tech.

You can read the full release notes for this driver here before you grab the 32-bit or 64-bit (exe) driver files.

Like AMD, Nvidia doesn't stop at optimising for today's Overwatch release. The 368.22 WHQL driver additionally provides optimisations for World of Tanks and War Thunder. There's not a lot more new stuff in this driver at all except for a single fix for SLI systems suffering from stuttering in The Division after 20 to 30 minutes of gameplay. For the full release notes you can download this PDF. 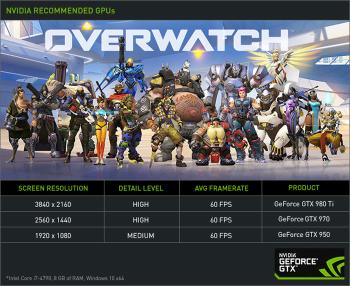 The Nvidia driver update can be snagged via the GeForce Experience or head on over to the GeForce drivers update page.

Ttaskmaster
If I update, does this mean my drivers will no longer be optimized for any of my other games? :D

All Gameready drivers are cumulative and will be included in all future releases.
Posted by Vorlon99 - Wed 25 May 2016 09:08

TheMeII
All Gameready drivers are cumulative and will be included in all future releases.

I think his comment was meant in jest… lol

Also since I updated to this driver my BF4 graphics (normally run in Ultra) are now displaying weirdly… super shiny and bright lacking finer detail, or totally black on all landscape/models when viewing/looking from certain angles… very bizarre. doesn't affect BF3 that I can tell. If I drop the settings down to low/medium its fine.
I didn't have time to explore the settings in finer variations.
Posted by Ttaskmaster - Wed 25 May 2016 12:33

TheMeII
All Gameready drivers are cumulative and will be included in all future releases.

Weirdly enough, a number of my older games would no longer run on my existing drivers last night, popping up a notification that I need to update…!!

I'm guessing that was a feature of the various launchers, though.
Copyright © 1998 - 2020, HEXUS.net. All rights reserved. HEXUS® is a registered trademark of HEXUS.