Bethesda has implemented the Vulkan API in DOOM on the PC. It says that its "big technology push" will bring higher framerates and therefore improved player movement and feel, to provide an "amazing" experience, making the most of the hardware in your PC.

We are reminded that Vulkan is a cutting-edge next-generation graphics and compute API from the Khronos Group. It allows low-level access to your PC's hardware resources and "moves most of the driver overhead into the developers’ hands". Bethesda says that it has worked closely with both AMD and Nvidia daily since March 2016 in getting DOOM and Vulkan working the best they can on modern PCs. 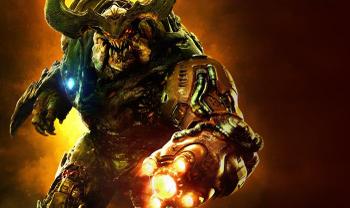 When launching DOOM from Steam you will get a prompt with a new menu to choose either OpenGL or Vulkan. Whatever you choose, it is possible to switch in game via the Settings > Advanced > Graphics API options menu. However, please note that if you switch, the game will restart. To uncap the framerate you must disable V-Sync in the in-game settings. At the current time only AMD GPUs with the new driver (see below) can run DOOM with asynchronous compute support.

For compatibility, if your graphics card meets the DOOM minimum requirements, it likely supports Vulkan. Exceptions to that rule include owners of the Nvidia GTX 690, and any Nvidia graphics card with 2GB of RAM on Windows 7 systems.

Only last week AMD released a new driver to address the PCI-e power draw issue that stirred up quite a bit of news coverage. Now a new driver, 16.7.2, has arrived with support for DOOM (with the Vulkan API). AMD also took the time to tweak some other aspects of the driver. Building on the power draw features, AMD has now introduced a compatibility mode UI toggle which is 'off' at its default setting. It has also made sure that if you restore factory defaults the toggle will be off. Full release notes for the new AMD driver are here, as are download links.

AMD Radeon RX 480 - 16.7.2 drivers. FRAPS doesn't work in Vulkan so we've benchmarked by pulling up the 'show performance metrics' in the advanced section, running around our map, and dividing the number of elapsed frames by the time to give an average FPS. The results may not be absolutely identical to what we've shown before - available here - but they're consistent in themselves and actually very close to the OpenGL 4.3 you see on that page.

Nice gains, huh? Being fair to Nvidia, AMD's OpenGL performance was way below par in Doom. The Vulkan numbers put the RX 480 on the right sort of footing against GTX cards, going by comparative performance in other games.

Unless I'm reading their article wrong, all they actually did was put AMD's internal testing results into a graph so they looked pretty - they didn't actually retest it themselves. Don't suppose Tarinder's got a spare five minutes over the next week or so…? ;)
Posted by kalniel - Tue 12 Jul 2016 10:06
Guru3d did a quick test to confirm the AMD results and compare to a 1070:

Hint: nVidia need to do some work, assuming they even have anything in hardware that can benefit from Vulkan. Not that the results aren't still very fast in either mode, but there's no gain from Vulkan.