Windows Vista has never seemed to be a popular OS. While people cling onto releases such as Windows XP and Windows 7, today's news is not probably going to cause much grief in the PC enthusiast community. Windows Vista (SP2) has entered its last full month of extended support. The ten year old OS actually has less than four weeks of such support left from Microsoft, with the line being drawn at 11th April. 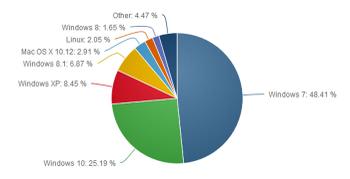 The end of extended support means the following: "Windows Vista customers will no longer receive new security updates, non-security hotfixes, free or paid assisted support options, or online technical content updates from Microsoft." Microsoft and partners will, from then on, be able to ignore the plight of Vista users, investing their resources in improving security and experiences for users of newer OSes.

Microsoft warns that those who continue to use Windows Vista might become more vulnerable to the security risks, malware, and viruses that are in the wild. Furthermore, software makers are optimising their applications and games for users of newer OSes which Vista users are missing out on. Unsurprisingly, Microsoft recommends that Vista stalwarts consider Windows 10 via upgrade, or to simply upgrade by splashing out on a new PC. According to NetMarketShare's latest figures, only 0.78 per cent of desktop OS users are running Vista.

Windows 7: next for the chop

We mentioned Windows 7 in the intro: if you are a '7' user, and this Vista news has made you a little uneasy, it's worth revisiting the Windows lifecycle fact sheet. Yes, Windows 7 (SP1) is the next Windows OS for the extended support chop. However, this event is nearly three years away - 14th January 2020 to be exact.

Perhaps the biggest surprise is that there are still 1/3 as many online desktop computers running a ten year old and much maligned version of Windows as Linux. Does anybody know the breakdown of Linux distros?