Back in August last year Microsoft updated its Windows Lifecycle Policy FAQ with regard to support for the latest processors and chipsets. At that time it warned "As new silicon generations are introduced, they will require the latest Windows platform at that time for support." Microsoft said the policy shift was necessary so that it could focus on the "deep integration between Windows and the silicon". It then stated that Windows 10 would be the only supported Windows platform for Intel Kaby Lake and AMD Ryzen CPU users.

Now users of Windows systems prior to Windows 10 who are still supposed to be receiving OS updates from Microsoft have started to see that available updates are being blocked. With Windows 7, whose mainstream support ended in 2015, the move might be seen to be somewhat reasonable. However, Microsoft has also stopped updates to Kaby Lake and Ryzen systems running Windows 8.1, an OS which isn't scheduled to leave mainstream support until January 2018 (extended support to January 2023). 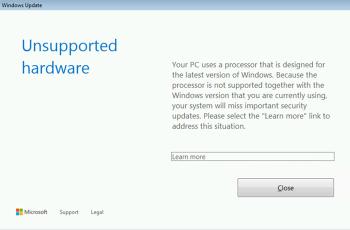 The 'Unsupported Hardware' error message that people are starting to see is shown above. As the screenshot is not from my system, it comes via TechReport, I don't know what happens when you click 'Learn More', it may well take you to the Lifecycle Policy FAQ, as linked previously.

Skylake CPU home-build PC users will face a similar problem in 15 months time if they are running Windows 7 or 8.1. From 17th July 2018 Microsoft will stop providing OS updates to such PCs, likely accompanied by an error message like the one above.

The most recent Steam hardware and software survey says that nearly 35 per cent of its users are still gaming on Windows 7 systems, and 8 per cent still use Windows 8.1.

These are two of the most popular anti-cheat solutions seen in Steam PC games.

51 QOTW: Does your PC meet the requirements to run Windows 11?

How do you fare with Microsoft's official PC Health Check app?

Posted by Corky34 - Fri 14 Apr 2017 10:51
It's one thing to say your not going to support newer hardware, it’s a whole new ball game when you publish an update that actively blocks further updating, and don't even get me started on how Microsoft botched the update and people are finding 6th gen CPUs (Carrizo) are also being blocked.
Posted by Cr@ig - Fri 14 Apr 2017 11:29
So wish there was an alternative out there other than Linux.
Posted by Biscuit - Fri 14 Apr 2017 12:11

Cr@ig;3797089
So wish there was an alternative out there other than Linux.

Cr@ig;73822
So wish there was an alternative out there other than Linux.

we can go back to XP