Just ahead of the weekend Microsoft announced and gave some details of Viva, a new employee experience platform (EXP). With the Pandemic still having a large effect on our lives, no one expects a rapid return to the office, and hybrid working is perhaps the new normal Microsoft has been looking into creating an office culture without the physical office, through Viva. Moreover, Microsoft reckons tapping this currently fragmented market is a total US$300bn opportunity… 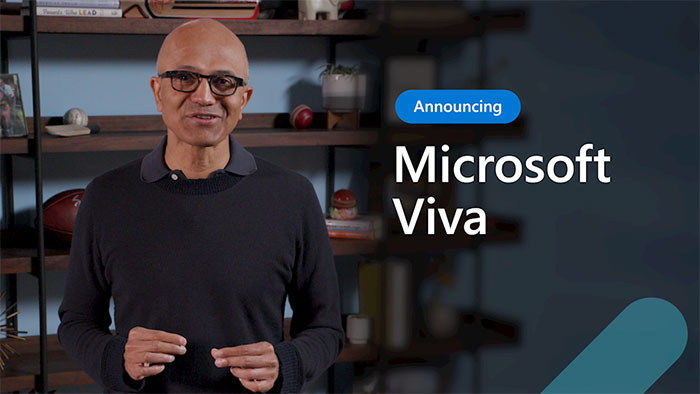 Microsoft showed it was ready for hybrid working with the arrival of Microsoft Teams for consumers in March last year, as part of Microsoft 365, which enabled people to join an integrated environment with meetings, calls, chat, content collaboration, and business process workflows. However, it felt that more was needed to virtualise the office environment – a concept dubbed an employee experience platform. Microsoft says that Viva is the first EXP built for the digital era which was thrust upon us last March.

Microsoft Viva is summed up as bringing together "communications, knowledge, learning, resources, and insights into an integrated experience that empowers people and teams to be their best, from anywhere". It integrates with Microsoft Teams and other Microsoft 365 apps that people use every day. 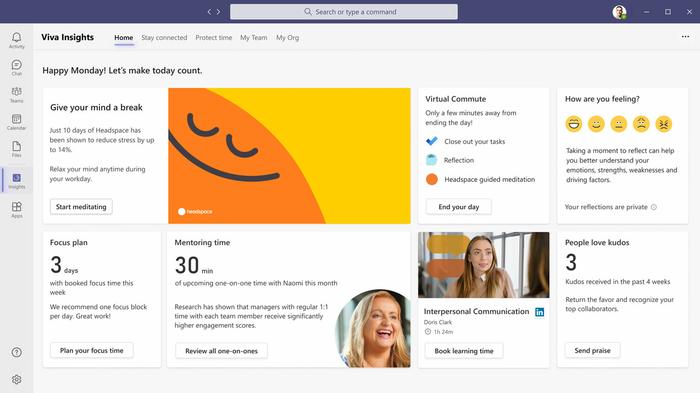 Four modules make up the Viva EXP as it is set out today, covering key areas of Engagement, Wellbeing, Learning and Knowledge. 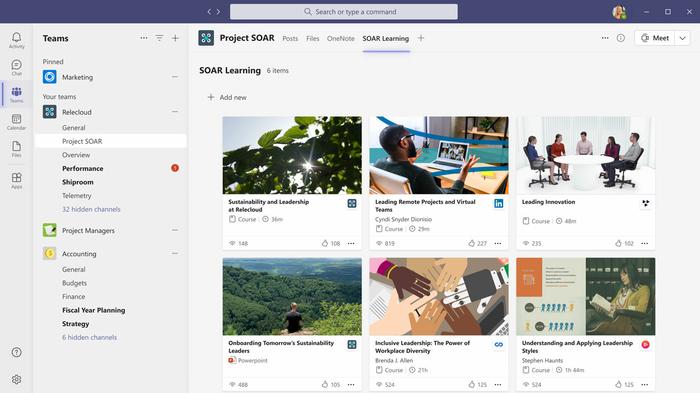 Microsoft is starting to roll out Viva experiences right away. Viva Topic is generally available, as are the public preview of Viva Insights and a private preview of Viva Learning. The developer is keen to stress that this is just the beginning of Viva and even in 2021 we will see more innovations added to the EXP. The video below shows the potential of the platform going forward.

Posted by Saracen999 - Mon 08 Feb 2021 11:32
If this is the future of office/home-office working, well, all I can say is it makes me heartily glad I'm retired. It looks to me to be a software corporations idea of a “platform” designed to give employees an “experience”, when most employers just want them to do theirs jobs and not faff around in a hybrid between a Facebook time-wasting session and a Zoom meeting.

It also strikes me as a classic example of ‘bass-ackwards syndrome’. Technology should be finding a problem and coming up with something to solve, or at least mitigate, it. This looks more like coming up with a solution then trying to find a problem for it.

And as for all the corporate-speak?? “Employee Experience Platform”? Give me a break.

I sure do feel sorry for those still working for a living if this is what the future office looks like.
Posted by philehidiot - Mon 08 Feb 2021 13:26

Saracen999
And as for all the corporate-speak?? “Employee Experience Platform”? Give me a break.

“Hi, could you have a look at some accounts?”
“yeh, I'm just injecting my nutrient pack, give me a minute and I'll jack in”
“operator”
“need to go to the finance department… and I need guns, lots of guns”

*Whooooosh*
Posted by cheesemp - Mon 08 Feb 2021 13:44
I'll be honest Saracen999 this is a problem that needs addressing - certainly in my experience. Having worked for a tech firm that has always hated working from home (WFH) I've really enjoyed the chance to WFH but its very disconnecting. Microsoft Teams has been about the only thing keeping team communication going since lock down - I don't know how my team could have managed without. Anything that can make it easier to feel part of a team rather than just a unit of production on my own would be very nice!
Posted by Saracen999 - Mon 08 Feb 2021 17:06

cheesemp
I'll be honest Saracen999 this is a problem that needs addressing - certainly in my experience. Having worked for a tech firm that has always hated working from home (WFH) I've really enjoyed the chance to WFH but its very disconnecting. Microsoft Teams has been about the only thing keeping team communication going since lock down - I don't know how my team could have managed without. Anything that can make it easier to feel part of a team rather than just a unit of production on my own would be very nice!

I don't disagree about the “problem” with WFH, though I'd describe it more as a fundamental feature of it than a problem, as such. Like most things, they have advantages and disadvantages, and sure, that definitely includes WFH.

I'd also add that, in my opinion, WFH will really suit both some people and some types of work, but that's one extreme. It will also really not suit some people, and isn't really appropriate for other types of work. That's the other end of the spectrum. I'd guess most people lie somewhere in-between the two ends.

A little context. I have WFH'd for, oh, 30 years. As a freelance, I worked for a variety of employers, and it might be weeks at a time for one, or several different ones in a day. I didn't have “a” team, but was effectively a disparate part of several. And we didn't even have MS Teams, Zoom, etc, to fall back on. I'd typically meet up with the rest of each team from time to time, usually during a press briefing somewhere. More than a few times, on a Jumbo to or from somewhere. Very occasionally, I'd visit their offices.

I explain this to underscore, believe me, I know about the disconnect. For me, it was utterly central BUT compensated for by the degree of indepedence it gave me, and, yeah, financially.

My wife, on the other hand, is an office bod who has been working at home for …. yikes …. nearly a year. Doesn't time fly? In her case, it's purely due to pandemic precautions. If you ask her, she'll tell you that she :-

- 5-10% hates it, because she misses the cameraderie, the byplay with the others, the coffee machine chats, etc., and the resultant relationship-building.

In my day, we managed “teamwork” largely by phone. And though I was freelance, as part of a publishing operation with very real deadlines because printers were booked, even as a freelance you certainly were part of a team. Or about a dozen teams, most months, in my case.

My conclusion? I'm moderately anti-social. Or maybe, a-social is a better way of putting it. I have no problem working in offices (did it for years) and get on with people, both in person and remotely. But I don't need to be in a team. As a writer and author, that's good luck because few jobs are quite as solitary.

The wife misses the office environment more than I do but still, rates the advantages of WFH over the disadvantages. For others, the balance will be reversed and I'm sure there are some for whom the WFH lifestyle would be torture.

I get the nuances, believe me. I'd also point out that I regard our current (and the last nearly-year) as neither ‘normal’, nor justification for this sort of “platform”. Not in and of itself.

So here's what I think is going on.

MS have been caught short by Google, Facebook, Twitter, Instgram, mobile phones, etc (no doubt, many others) and are keen to …. reposition. I think we can see that from everything they've done in recent years, starting from moving from ‘producxt’ to ‘services’.

And, I think they read the current pandemic WFH craze as a sign of things to come. And IMHO, they would be right. That's not to say things will carry on as they are now, once (and assuming) the Covid limitations ease. They won't. BUT …. many (but not all) employers will be taking a long, hard look at how working from home, when they were forced to implement it, worked out. Many will draw the lesson from it that, while the current extreme is too far, there are lessons to learn, efficiencies to make and costs to save. Personally, I have no doubt, at all, that the ‘normal’ of the future involves quite a bit more WFH than the ‘normal’ of the past. But it also doesn't look like the very much ‘abnormal’ of the last year. If I were a commercial landlord of city office space, I also think I'd be pooping bricks round about now. Just as we're in for a high street retail revolution, I think we're in for an office/WFH shake-up. Offices aren't a thing of the past, but my bet is we're going to see quite a bit of shrinkage, quite a bit more WFH, more hot-desking, and so on.

I just don't see an “employee experience platform” as any substitute for the face-to-face bit of the office experience. It's still remote, still the far side of a screen, you still won't get the personal relationships that result from meeting people in person. More than a few times, I spent days, or even weeks, in foreign countries meeting people I worked with remotely, just to build those relationships because they made the ‘day job’ that much easier.

So yeah, I'd entirely agree our current enforced WFH definitely involves a problem that needs addressing, but I don't see this “EEP” as being the solution. You still have the remoteness, the isolating effect of the screen, the “coldness” as my wife put it, of “meeting” on a screen. That's why I think this is a solution looking for a problem. It's not that there isn't a problem, but that this misses the point.
Posted by cheesemp - Tue 09 Feb 2021 09:40
@Saracen999

That's a good point. I do enjoy WFH but having worked with big UK dev teams getting everyone communicating for software development is essential. I now work more with an outsource team in the Ukraine which was very hard before slack/teams. These tools do not replace the real relationships you build in an office but they are way better than nothing when you cannot meet together and anything that can bridge some of the gap is helpful.

Its an interesting point about where all this will end up now. My firm has almost been zealous about getting us back in the office - we where back in before the first lockdown ended on distanced desks. I personally would love more WFH because as I mentioned I don't even really work with a British team now anyway. They do seem to enjoy lumping all of our R&D department team as being in a team though - we still have some big development teams. (Some of my colleagues are desperate to go back in though!)

My wife has on the other hand has been told she is unlikely to ever go back to the office for her admin role. My real hope out of all this is more flexibility and if these tools aid with this then what's the harm?
Copyright © 1998 - 2021, HEXUS.net. All rights reserved. HEXUS® is a registered trademark of HEXUS.