Epic Games has published a blog post about a new utility on the way for Unreal Engine users. The cloud streamed tool is called the MetaHuman Creator, and as per its name it is designed to be used to quickly and easily create realistic humans for your gaming or animation projects.

MetaHuman Creator can help users create diverse digital humans "of the quality required by next-gen platforms and high-end virtual production," in under an hour, where previously it might have taken weeks or months.

The new tool works by providing an ever-growing library of variants of human appearance and motion and allowing them to be quickly customised. Enhancing the functionality in the online app is the fact that it will only blend examples in the library in plausible, data-constrained ways.

Users start by selected a number of preset faces as ingredients, then there are approx 30 hairstyles to work with, 18 body types, and various clothing sets. Once happy with their creation users can download the asset via Quixel Bridge, "fully rigged and ready for animation and motion capture in Unreal Engine, and complete with LODs," says Epic. 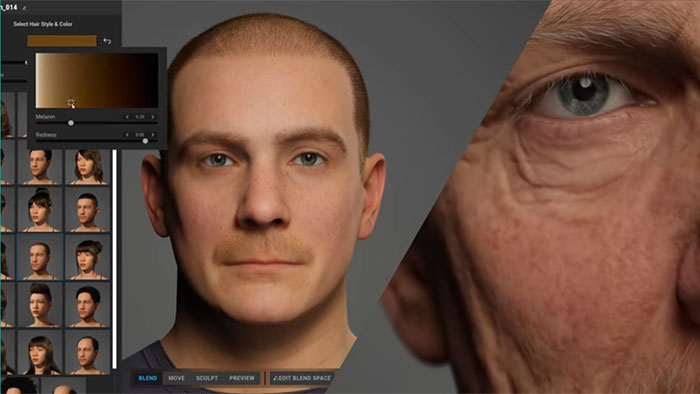 Importantly, the download includes a Maya file, including meshes, skeleton, facial rig, animation controls, and materials. These resources can easily be brought into animation and performance capture tools or key frame animation tools. Epic says it is working with a wide range of vendors to ensure MetaHuman support.

Epic is going to being a MetaHuman Creator Early Access program in the next few months but if you can't wait to give the tools a spin there are two fully finished sample humans that have been pre-prepared for your tinkering fun. You can explore, modify, and use these two samples in your Unreal Engine 4.26.1 or later projects right away – downloadable via the Learn tab of the Epic Games launcher.

What do readers think about this MetaHuman Creator tool and its potential?

Wirko
Why is that so slow? I'd expect it would take minutes, not months, for a Ryzen or Core processor to generate the physical model. Or do these models contain a working brain?