When the Windows 11 update first became official, it was great to hear that it would be a free update to existing Windows users, but it soon emerged that there would be significant roadblocks for some users, which caused some controversy. Getting straight to the point, the minimum system requirements excluded some surprisingly modern processor families and for the first time ever made TPMs and Intel PTT/ AMD fTPM tech into a talking point.

These two main stumbling blocks to Windows 10 to Windows 11 upgrades were eased for the Windows 11 Insider Preview builds, which are now into a second or third release. People have even managed to get Windows 11 Insider Preview up and running on old Lumia smartphones. Microsoft has hinted that, as far as processor support goes, depending upon the preview feedback, it is looking at relaxing the Windows 11 minimum requirements to include a further generation of processors. This means that come general rollout time, for the release version of Windows 11, it might support CPUs as old as the 7th Intel Gen Core processors (Kaby Lake), and the AMD Zen 1 processors (Ryzen 1000 series). Meanwhile, the compatibility checker app seems to be on hold, waiting for this decision.

Some Windows 10 users interested in upgrading when the time comes are pondering over sidestepping Microsoft's minimum requirements. However, a recent AMA on Windows 11 Upgrade Paths featuring Microsoft expert employees seems to insist that the hardware requirements won't be flexed any time soon. 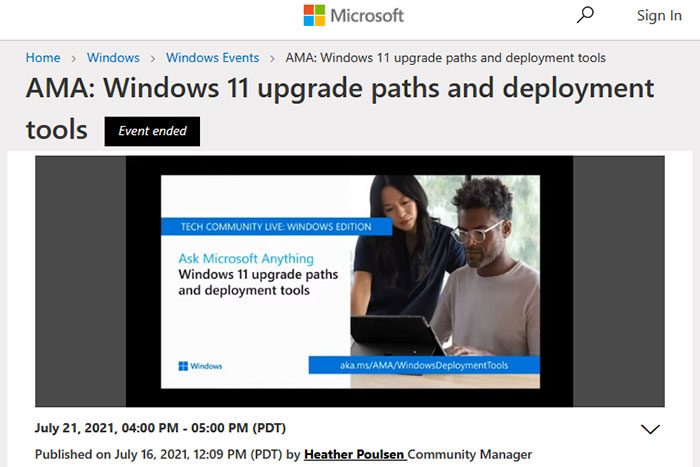 Microsoft Program Manager, Aria Carley, told the AMA webcast watchers that she knows "it sucks" that your capable but slightly out of date system isn't going to get offered the Windows 11 update. However, Carley explained that it will be for the greater good. The minimum requirements as they stand will "keep devices more productive, have a better experience, and better security than ever before so they can stay protected," she said.

You won't be able to cheat the upgrade, particularly in organisations, added Carley. "Group policy will not enable you to get around the hardware enforcement for Windows 11," warned the Microsoft exec. "We're still going to block you from upgrading your device to an unsupported state since we really want to make sure that your devices stay supported and secure."

One good thing is that Microsoft isn't going to be offering ineligible systems an upgrade, only for you to find out later that it isn't actually going to install. Your device, connected to Windows Update, "will actually be able to determine by itself before ever being offered and wasting that download," explained Carley.

When Windows 11 does hit general release, I am quite sure that some enterprising individuals will work out a way to install it by swerving minimum compatibility checks and things will be 'OK'. However, when that time comes, one must remember unofficial OS patching probably isn't a great move in our malware-rife world. You probably won't be surprised that malware has already been distributed dressed up as a Windows 11 installer, for example.

I am quite sure that some enterprising individuals will work out a way to install it by swerving minimum compatibility checks and things will be ‘OK’.

This therefore completely removes their arguement for the tight restriction being to improve security as its clearly going to put the hundreds of thousands with older hardware at risk when they stary googling how to install windows 11 on older hardware.
Posted by CAT-THE-FIFTH - Tue 27 Jul 2021 15:46

This means that come general rollout time, for the release version of Windows 11, it might support CPUs as old as the 7th Intel Gen Core processors (Kaby Lake), and the AMD Zen 1 processors (Ryzen 1000 series). Meanwhile, the compatibility checker app seems to be on hold, waiting for this decision.

Also I would say its probably millions or even tens of millions of people on older hardware.