Earlier in October, HEXUS reported on some AMD Ryzen performance issues being experienced by early adopters of Windows 11. In our report we mentioned that both Microsoft and AMD were working on a solution for coding gaffes adversely affecting Ryzen features such as the CPU's L3 cache latency, and the 'preferred core' technology (CPPC2) which is of particular benefit to many-multi-core processors.

At the time of our initial report on the AMD Ryzen Windows 11 wrinkles, we heard that fixes were on their way to the fledgling OS that would be made available later this month. Just ahead of the weekend, halfway through October, Microsoft released an update to Insider testers in the Beta and Release Preview channels: a new Windows 11 test build, 22000.282.

Understandably, with one of the first batches of fixes for a new OS, there are a lot of them. In total, there are over 50 fixes to be considered in the release notes for build 22000.282. You can read through the fixes provided on the Windows blog, but it is more of a bullet point list than a proper blog post, probably due to the information deluge within.

The fixes provided cover a multitude of the major aspects of Windows 11 such as; the Start Menu, File Explorer, PowerShell, and many more. With relevance to our headline, the first bug fix in the list was "We fixed an L3 caching issue that might affect performance in some applications on devices that have AMD Ryzen processors after upgrading to Windows 11 (original release)." 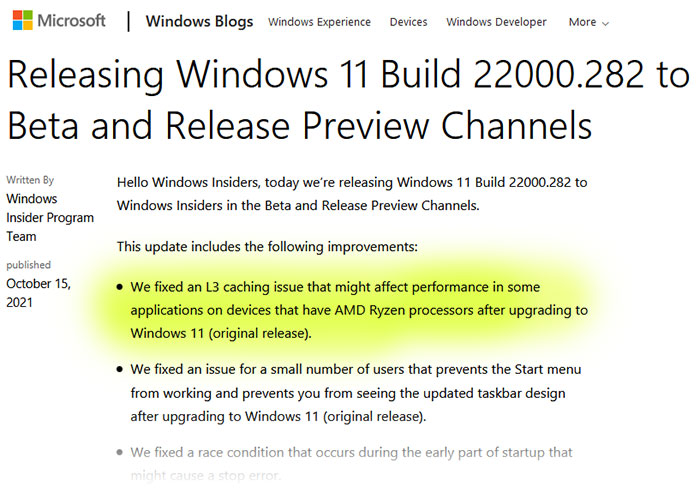 This is an important fix for AMD users who upgraded to Windows 11, and it has been thankfully speedy in its release. With this patch/update applied, AMD users will no longer experience the up to 15 per cent performance hit in gaming (the impact was less severe in most productivity apps).

Checking through the lengthy bug fix list, one sees no mention of 'preferred core' technology or CPPC2 – so that change is still in the cooking pot.

I'm not sure when the AMD Ryzen L3 cache fix is going to be released for mainstream users, but it should be in line with previous statements pointing to later this month. A CPPC2 fix is expected within the same timeframe.

Posted by Kovoet - Mon 18 Oct 2021 13:47
I won't upgrade why change when it's working perfectly now. They will struggle with this for a while I think.
Posted by mers - Mon 18 Oct 2021 14:08
From what I've read and viewed on various sources M.S worked closely with Intel for their newer chips but not AMD , smells of Intels dirty trickery again. Also that AMD were left to find a fix and that M.S. came back with one that made matters worse but apparently now eorking with AMD on this. All this should have been ironed out equally between the big players before releasing this latest screw-up of an O/S.
Posted by Tabbykatze - Mon 18 Oct 2021 14:10

mers
From what I've read and viewed on various sources M.S worked closely with Intel for their newer chips but not AMD , smells of Intels dirty trickery again. Also that AMD were left to find a fix and that M.S. came back with one that made matters worse but apparently now eorking with AMD on this. All this should have been ironed out equally between the big players before releasing this latest screw-up of an O/S.

Why i was trying it is because theres a very annoying bug in win 10 that win 11 fixes
- If you have dual monitors with mixed cable types (DP and HDMI for me), if you leave the PC long enough to power off the displays, theres a roughly 80%+ chance of all desktop windows being shoved onto one screen when you wake it, meaning you have to manually drag all the windows back. Gets annoying very fast!

But i found all the w11 bugs and other annoyances just too much to cope with in the end…
Posted by mtyson - Mon 18 Oct 2021 15:53
AIDA64 Official reckons that the patch works well for AMD Ryzen users:

“We've installed and tested the upcoming @Windows patch (KB5006746) and it seems that it fixes the L3 speed issue that affected the @AMD Ryzen processors on the initial release of Windows 11.”