Microsoft announced the Windows 10 Anniversary update back in March at its BUILD 2016 developer conference. At the time we got the rather nebulous time slot of "this summer" provided as the launch date. Of course, being an anniversary update, was a clue to narrow down its expected launch date – the date precisely one year from its global launch anniversary would be 29th July 2016.

Now it looks like the precise date for the availability of the Windows 10 Anniversary update will be Tuesday, 2nd August. Perhaps there will be some kind of 'celebration' on Friday, 29th July but the downloading taps won't be turned on until the following Tuesday. This information comes from the fact that Microsoft published a blog post a few hours back with the following headline:

According to The Verge, the story was only up for 'moments' so no one grabbed any content and only the headline was seen and recorded. It is thought that someone in Microsoft's web/blog publishing department accidentally activated the story but the error was soon corrected. With the blog post ready to fire, it probably won't be that long until we get to see the whole post, officially. 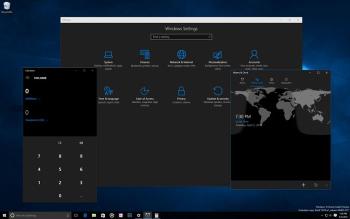 The Anniversary Update will be free to anyone who is running Windows 10 but it also marks the end of the free upgrades from Windows 7 and 8.x, or so we are lead to believe. The update is said to bring improved biometric security, Windows Ink, a dark mode, more Cortana integration and features, plus further fit and finish to the Windows OS. One addition we aren't looking forward to is further Start Menu advertising slots, but that shouldn't be a problem for existing users upgrading.

The full blog post, referred to above, has now been published by Microsoft.

But with “promoted apps” perhaps MS' “changed monetisation” program becomes clearer, as does the reason for their snooping on users. I would advise MS on where they can stick it, but I'm not sure they could find it with both hands, a SatNav, a bloodhound and an anatomy textbook.
Posted by Ironbuket - Wed 29 Jun 2016 12:32
M$: Now that we have all the suckers, I mean customers, trapped, I mean upgraded to Windows 10. Here is our real plan. Muha ha ha!!!
Posted by nar53 - Wed 29 Jun 2016 12:40
What is Windows 10 Anniversary?