Samsung has announced that it has begun mass production of the SM951 high performance, low powered PCIe SSD in the M.2 form factor. It expects these storage devices to be utilised in ultra-slim laptops and workstations. This SSD is the successor to the firm's XP941 and beats that device hands down, by providing 30 per cent faster data transfers and 50 per cent better energy efficiency. 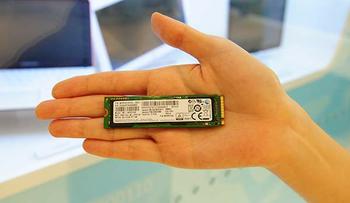 Senior Vice President of Memory Marketing at Samsung Electronics, Jeeho Baek, said that the introduction of the SM951 would help to "accelerate growth of the ultra-slim notebook PC market". Furthermore he suggested that Samsung would continue to improve performance to stand out from the competitive SSD crowds.

In new laptops and workstations which adopt the PCIe 3.0 interface performance is even more perky. Official figures say that in this configuration the SM951 can read and write sequentially at 2,150MB/s and 1,550 MB/s respectively. That's about four times as fast as a common-or-garden SATA SSD drive.

It looks like this Samsung SM951 M.2 SSD is destined for a new Lenovo laptop or hybrid

The PCIe 3.0 interface adoption also results in lower power usage, the SM951 uses about half the watts used by the XP941 when active and reading and writing data. When idle the new drive is even more impressive, as the first SSD ever to support the L1.2 low power standby mode, in this mode it uses just 2mW moving up to 50mW in its L1 state.

Most of the look of an SSD is cosmetic. Unless there's no space for cosmetics, as is the case for mSATA and M.2 drives.

Take this brand new, sweet looking Plextor PCIe SSD - scroll to the bottom and you'll see that under the heatsinkery, it's just… a M.2 SSD like this Samsung.

Here's the inside of a brand new Samsung 850 Pro.
Posted by KendrickDM - Fri 09 Jan 2015 12:43
For the price this little device is going to set you back a resilient socket connection with a protective case is not much to ask for - something we could stack or fit into a 2.5 inch bay caddy, looks too SATA-ish and they split on the PCB at which point as everyone knows it is a very expensive brick after a bit of cable pulling. I would rather see a proprietory cable to PCIe interface and the device be secured somewhere safe where the next card change will not snap it. As it is it looks like a noname EIDE card to SATA card plugged into the back of a drive, they last about the first day you use them then the cable weight breaks the card off.