And the came the mighty UEFA 2008, which was developed by the same team that works on gameplay improvements for FIFA 09 . It’s essentially a glimpse of what we can expect to see in FIFA 09.

In my review I stated:

It just gets so many things right and expands on all the good things from FIFA 08. The new game modes, such as ‘Battle of the Nations’ offer true innovation in the genre and should help no-end in fueling and stirring national rivalries. The new features, such as the interactive celebrations and cut-scenes, have added a new dimension to match-days, making scoring as satisfying as it has ever been in an EA football game, and the enhancements to the match-day engine, which include the use of negative tactics by opponents when they are playing away from home, makes for an accomplished football experience.

FIFA 09 is going to be amazing, I'm sure of it. After seeing what EA has done over the last couple of years, my faith has been restored in the series. It sat on its arse for a few years and lost its crown, but it’s now risen to the challenge and the developer is striving to push the boundaries of what we normally expect from football title, with full integration with its community service, sumptuous next-gen visuals, sublime animation technology and an all-round more tactical and realistic experience on the pitch.

FIFA 09 will have over 250 additions and enhancements to its core gameplay. EA's style over substance approach to previous FIFA games is no more. FIFA has laid down the gauntlet and its going to take one hell of a game to take that crown from it again. 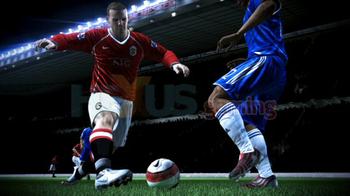 Posted by Beserker - Tue 22 Jul 2008 16:32
Couldn't agree more, great article. I've felt almost insulted by Konami over the last couple of years :angst: , with the tripe updates they've realeased, truly they had run out of ideas when pretty much the only new feature was the ‘dive’ button. I wonder how long it took them to think that one up……

I have Pro Evo 4 on the PS3 and it looks as good as the new ones do with it being upscaled. Although I've always been a bit of a fanboy of FIFA, I always had to learn to play Evo as all my mates did, I just couldn't get into their way of thinking….I always knew FIFA would come good again…and it did. But EURO is just superb :)

I only ever play mulitplayer, and still play it for about an hour a day at work (lunchbreak) but I can’t believe it was ever released in the state it was:

Advantage rule clearly broken beyond all reason and no use to the game what-so-ever.
Poor AI - Defenders keep backing off and backing off, making it easy to just run forwards and launch a long range strike which all too often went in, “earning” an instant equaliser for the player who's just concded.
Being able to just hoof the ball upfield and have it drop on your attacking player, who is then always faster than the defender.
When running across the pitch, the player with the ball is always fastest.
Sliding tackles always going towards the ball, rather than in the direction the player is facing meaning you can't always block a players route.

It goes on and on. One of the easiest single player modes ever, complimented by a multiplayer game so frustrating it makes you want to physically hurt EA Sports employees.

That being said, I'll give Fifa ‘09 a chance if they’ve actually bothered to play-test it.