Hands-down, a lot of fun

Quad-wielding is visually impressive but also a lot of fun to execute as you switch between conventional weapons and darkness powers. Combat is grotesque, but the fantasy violence is chillingly satisfying. Jackie has two demon arms protruding from his back and leering over his shoulders so that you can see them dangling in front of you either side of your head. Knowing you have these two arms as well as two other weapons immediately gives you an enormous sense of power.

In your “normal” arms you can carry two conventional weapons—in this case a pistol and an Uzi. These weapons work as if you’re playing a typical first-person shooter, but combine them with the demon arms and you have incredible power. With the left demon arm (controlled with L1) you can pick up heavy objects and toss them at enemies, sending them flying. Get the right angle and it’s great fun to line up multiple enemies and chuck a heavy object at them to make them topple over like dominoes.

Use your left demon arm to grab a person and you can execute some grisly finishing moves, pulling heads clean off, tearing bodies in half and shredding enemies limb from limb. It’s violent, yes, but the graphic noire style does take the edge of it and in no way does blood look real, or will you feel like ripping your neighbour’s heart out (like some pressure groups might have you believe). So, your left demon arm is great for long to mid-range combat and great at close quarters for killing enemies in a variety of entertaining ways. 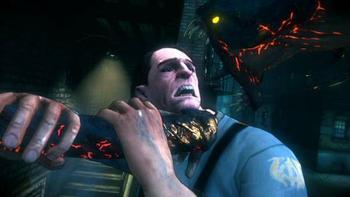 The right demon arm (controlled with R1) is more effective at close quarters and allows you to slash in four directions—left, right, up and down. It’s extremely versatile and brilliant for when you’re crowded and want to clear the area in front of you quickly so you can make a more measured left demon arm attack. The section that we played was obviously showcased so that we could test out the combat system and was fast-paced with waves of enemies attacking from all directions. You’d think that with the power of the demon arms at your disposal, you wouldn’t even look at using conventional weapons. However, we did find it necessary to use the full range of weapons, which do well to complement each other as you blast, rip, tear and impale dozens of unsuspecting foes.

Evidently, quad-wielding is a lot of fun, both from a visual perspective, and based on the amount of tactical freedom that it brings to the FPS genre. The graphic noire style, hand-made aesthetic helps to no end in portraying this crazy fantasy violence with such style, while the responsiveness and power of the demon arms makes them a joy to use.

I'll follow it with interest in the hope I'm wrong though.