You are here:
DS News

Nintendo has confirmed that its upgraded DS console, DSi, will be released in the UK on April 3rd and will cost approximately £149.

The DSi will be available in both white and black versions and will include two cameras, a bigger screen, a DS-specific download service, an SD card slot, and music playback functions.

Users will also be able to use a new online download service featuring DSi points, similar to Wii ware, that will allow us to download full games.

Built-in web browser
Improved audio
Backwards compatibility with the DS Lite (no Gameboy advance games though)
DS and Wii compatibility, which will allow you to take pictures with your DS and play them on your TV via Wii.

In the list of specifications, there does appear to be a backwards step for the handheld - the battery life. With the DSi, battery life will be shortened from 15-19 hours of play at minimum level of LCD brightness and 5-8 at full brightness (DS Lite specs), to 8-15 and 3-4 hours respectively. 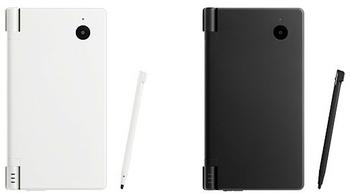 The full specs can be found at the official site, however, if you can't speak Japanese you're stuffed. Alternatively, head over to IGN , who have kindly translated it.

Nintendo surprises with 2DS handheld console, £109 in UK Professor Layton And The Lost Future - Nintendo DS Nintendo Switch is on track to eclipse the Wii and Game Boy Nintendo Switch OLED model will be released on 8th October Nintendo Switch Pro systems will be available as soon as Sept

NightshadowUK
For me, there's nothing there that screams, “Replace your DS Lite with me!”, quite enough…

Couldnt agree more, surley battery life should be extended in a new model rather than shortend :confused:
Posted by fallen2004 - Thu 19 Feb 2009 10:55
Whats the point of the top screen being touch sensitive. No games will accomidate it as they will all still have to work on the older DS and lite.

Id buy it if the web browser had flash but i doubt it.

Posted by slypie - Thu 19 Feb 2009 12:13
Totally pointless upgrade. As pointed out the 2nd touch screen won't get used otherwise they alienate people with an old DS. Plus battery life seems to be terrible. Another attempt to milk some more out of people.
Posted by Grey M@a - Thu 19 Feb 2009 12:23
There is no second touch screen according to Nintendo and just got this from Game:

You may have noticed that we have already contacted you this morning regarding the
Nintendo DSi, which was officially announced to the European market today.

Unfortunately we've had a bit of a hiccup!

In this email we listed the new features that can be expected with the DSi on launch.

One of these bullet points stated that the DSi will come with 2 touch screens, unfortunately
this is not the case.

The DSi will come with only one touch screen, the same as the DS, however both screens
on the DSi have been expanded to 3.25inches.

We're obviously sorry for this miscommunication, however we hope you share our colossal
excitement for the DSi release on the 3rd April.