The name and promotional artwork for the as-yet-to-be-revealed next helping of DLC (downloadable content) for Borderlands 2 has been inadvertently leaked. The fourth DLC for the Borderlands sequel will be called “Tiny Tina's Assault on Dragon Keep” and it will be released by developers Gearbox Software on 25th June this year. 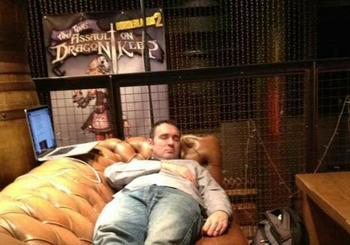 A photo featuring the publicity poster for Tiny Tina's Assault on Dragon Keep was published on Twitter yesterday by accident. A writer working at Gearbox took a snap of a co-worker, having a cheeky nap and published it on Twitter. However on the wall in the background, in almost perfect clarity, it was easy to see a large poster and the DLC title sporting a Borderlands 2 logo. This Tweet has since been deleted but it’s too late as it’s all over the internet. Eurogamer reported a follow up Tweet from the napping subject of the photo, Gearbox PR man Steve Gibson, which said “I did very much enjoy my nap!”

A trailer for this fourth DLC for Borderlands 2 was shown at the PAX East games show in March but that video was entitled “Bunkers & Badasses”, after a table top role playing game we see hosted by Tiny Tina. The original four main characters from the original Borderlands play the game with Tina. So perhaps they will be back as playable characters in this DLC? Please have a gander at the trailer below.

Polygon gaming news reports that this will be “the largest campaign expansion yet”. It will follow the usual pricing of $9.99 or 800 Microsoft Points but will be free to “Season Pass” owners. As mentioned above, if you’re interested you will have to wait until 25th June or thereabouts to get your hands on this DLC.

8-inch gaming UMPC previously was Intel Ice Lake only. Soon you can get Tiger Lake or AMD.

They never intended that. No.
Posted by Defiant - Fri 03 May 2013 17:28
I didn't play first one, but I'm about through the seconds default game content. Still got all the expansions to go. I'm happy with the £10 that I paid for the game and a further £10 for the season pass but I wouldn't pay more for it.

The games ok, it drags at points BUT tiny Tina is a hoot. I liked the missions that she gives in the game so I'm looking forward to this expansion :D
Posted by MrBozack - Sun 05 May 2013 12:44
I played Borderlands, The Zombie Island of Dr. Ned, a little of Mad Moxxi's Underdome Riot, not very much of The Secret Armory of General Knoxx. It was a generic Unreal Tournament type of thing. It was fun, but only really as a single player imho.

I wasn't even bothered enough to try Claptrap's New Robot Revolution or Borderlands 2.
This seems like Borderlands attempt at “Far Cry 3 Blood Dragon” to me.