"Facing incompetence from the police Holmes needs to get… creative, when chasing lines of inquiry in Crimes & Punishments.," Frogwares' business developer Olga Ryzhko writes on the PlayStation Blog. "In this gameplay trailer, watch as Holmes earns the trust of a suspect by transforming himself, and his accent, into a sailor, to gain access to the information he desires." 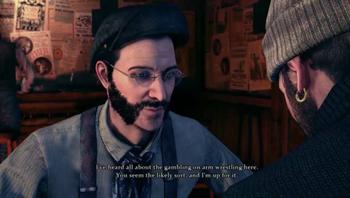 The trailer shows Holmes chasing up lines of inquiry as a result of his frustration about the slow progress of the Victorian Met police. The famous detective shows off his mastery of disguise as different characters, whilst adopting the relevant accent of course, in order to help crack the case. In this case, you will get to experience a perhaps not so authentic Irish accent, listen in the trailer below.

The video also gives us a first peak at Holmes' Baker Street apartment. Here a wardrobe and a dressing table full of wigs, hats, glasses and facial hair enhancements are the ingredients he needs to deceive the both the police and the criminals he is investigating. 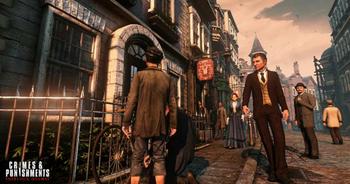 Besides winning the trust of suspects, the blog post also states that the disguise skills will allow players' access to mini-games such as cross-bow firing and the arm-wrestling shown in the trailer above. The game will include six cases in total for Holmes and Watson to crack and is set for release on PC, PS3, PS4, Xbox One and Xbox 360 on 1st October.

OilSheikh
Are these the same guys who made LA Noire ?