CD Projekt Red has published the trailer for its upcoming The Witcher 3: Wild Hunt - Blood and Wine expansion. In a break from established practice, the games development firm chose to publish its launch trailer a week ahead of the game expansion's release on 31st May. Fans of this popular open world monster slayer game will be eagerly waiting the 30+ hour adventure expansion teased in the video below.

Buyers of the Blood and Wine expansion will enter a new region, Toussaint, referred to as 'the land of summer', a remote valley untouched by wars. In the region there are wandering knights, noble ladies and magnificent wineries but now the kingdom is being shockingly torn apart by a series of savage massacres. The residents of Toussaint suspect that they may have strayed from 'the path of virtue' and are being punished by the gods with the arrival monsters of 'unspeakable evil' and ferocious beasts. 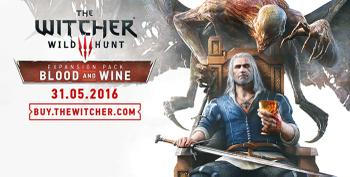 Due to the above terrible events, Geralt of Rivia the legendary monster slayer, has been called in and will take on his last great contract. The Blood and Wine expansion offers over 30 hours of adventure and is "full of dark deeds, unexpected twists, romance and deceit," say the developers. 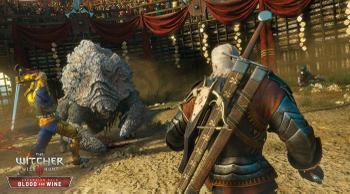 If the above trailer isn't enough to whet your appetite, you can have a browse through the Blood and Wine expansion screenshots that CDProjektRed uploaded on Friday at this link, and look through a previously published gallery here.

Posted by shaithis - Wed 25 May 2016 12:12
Only just started playing the base game a few days ago and then my Total Warhammer key appeared, half expecting a fix patch for Quantum Break soon as well…..too much to play and the steam sales are just around the corner!!!
Posted by jonathan_phang - Wed 25 May 2016 12:46
I've got to the 3rd main region and wanting to tick this off my list, but if you're vaguely completionist then theres just soooo much to do. And although a lot of the side quests are standard, they are just so well done, in a world that I cant get enough of. Ive also got QB (Performance isnt where I want it to be, so got an XB1 code for £15) and loving it. Really wanting to pick up the DLCs too for W3, so will wait until they come down a bit on GOG.
Posted by stevie lee - Wed 25 May 2016 13:03
in my 2 playthroughs so far i'm up to 254 hours 8 minutes.
first time took 115 hours pre Hearts of Stone. and didn't really explore that much, just bee-lined to the quests and fast travelled everywhere.

this expansion, Blood & Wine, is meant to be played after you finish the main game. so if you've only just started , then enjoy it, you'll be here a while. :p


I've pre warned my sister to not use the internet next week, so I can download it.
HoS was 4Gb plus 17GB of patches first.

don't know how big B&W is. the landmass is about the size of the Velen map, so may be 10GB+ plus all the patches :shocked2:
Posted by kalniel - Wed 25 May 2016 14:01
New graphics fidelity too - doesn't retrospectively apply to rest of game sadly.

patch notes today. don't know when the patch is available.

download for B&W is Monday 3 days 5 hours from this post time. check on https://www.gog.com/account under Witcher 3 and theres a timer.(need to have pre-bought it for it to show up)
There is no pre load on steam because they dont support dlc pre download yet http://forums.cdprojektred.com/threads/77911-Blood-and-Wine-FAQ-No-Spoilers?p=2342071&viewfull=1#post2342071

Q: What is the recommended starting level for NG+?
A: At least lvl 64.